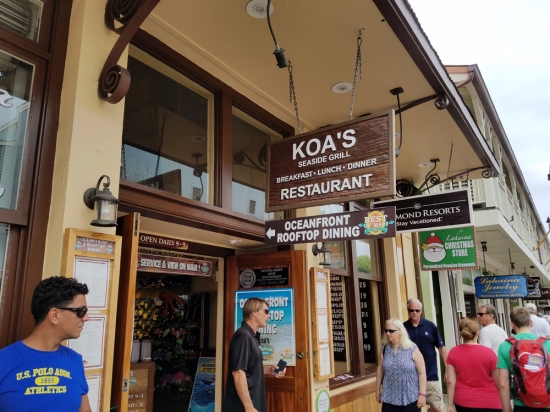 I read a lot about a brunch place called Gazebo up in the Kapalua area while I was doing some research for my family’s Hawaii trip. Reviews were nothing but positive about their food and also said the place was pretty popular for brunch. The downside about popularity is that if you don’t get there early, you’ll probably end up waiting for a while to get seated. Luckily, one review I stumbled across mentioned they had a sister restaurant in Lahaina called Koa’s Seaside Grill, which served the exact same menu. Some good info to have in the back pocket for sure.

As it turns out, this info did prove to work out well for us. For my family’s first full day on Maui, we only had planned a Segway tour in the early afternoon, and the tour office wasn’t too far from Front Street, the main stretch in Lahaina. Koa’s, being so close, seemed like a great choice for us to fill up on some food before our tour.

Front Street certainly has a pretty diverse food scene, with numerous restaurants dotted around the area to alleviate your appetite. What are you in the mood for? Burgers? Sandwiches? Pizza? Seafood? Gelato? Shaved ice? Odds are that you’ll find a place that’ll hit the spot. Plus, the bonus of having restaurants right on the water is the oceanfront view right from your dining table (if you’re lucky enough that one is available).

After coming off the street, you walk through a small gift shop before you arrive at the host stand to get seated. With two levels, the restaurant can certainly handle a pretty big crowd. Unfortunately, when we arrived, the hostess told us that the upper level was already pretty much packed, with no oceanfront tables available on either level. We ended up sitting at a table in the middle of the dining area, but could still look out and see the ocean, along with the neighboring islands of Molokai and Lanai.

The breakfast menu at Koa’s features a good spread of items, ranging from pancakes to omelettes to French toast, while their lunch menu has some tasty sounding burgers and sandwiches. We had arrived just in that transition period, where there was about 20 minutes left to order breakfast and the restaurant had just started serving their lunch options. It was a good dilemma to have, and it seemed like everyone was in a breakfast mood. My dad and I ordered omelettes while my mom and brother decided to split a plate of fried rice.

It didn’t take the kitchen very long to crank out our food; great for us since everyone was pretty hungry at that point. I think the biggest surprise was the fried rice and just how much food one order turned out to be. A gigantic mound big enough to feed all four of us, the fried rice had bits of scallions, carrots, peppers, and, of course, Spam, mixed in, all topped with eggs cooked to order. I had ordered the Big Kahuna omelette, complete with bacon, Portuguese sausage, onions, mushrooms, Pepper Jack cheese, and avocado to top it all off.

It’s a little surprising to me, but I think the side item of country potatoes left more of an impression on me than the omelette itself. Cooked crisp on the outside and still soft in the middle, the potatoes were seasoned just right and were a great accompaniment for the dish. But that’s certainly not to say that I didn’t enjoy the omelette either. The mixture of bacon and Portuguese sausage was certainly rather rich in savory flavor, and was balanced out well with the avocado.

For the fried rice, my parents commented that it was a little too salty. That wasn’t enough to stop us from finishing off the plate though. Not sure if someone was maybe a little heavy-handed with the seasoning / soy sauce, and the Spam added some more salt to the dish on its own as well. I did like how the raw scallions helped to cut through the savory flavor in the dish with its tartness, and the scrambled eggs on top helped to balance things out as well.

If you’re looking for a place to get some hearty food with good portions and great dining views, Koa’s Seaside Grill sounds like your stop on Front Street. Depending on if you’re hungry enough, you could always try to tackle one plate of that fried rice by yourself. With the restaurant located on the northern end, it’s a perfect place to load up on some food and then continue on walking down the street to check out the rest of what Front Street has to offer.

And finally, here are my rankings for Koa’s Seaside Grill:

Hearty? Yes. Big portions? Yep. Each menu for breakfast, lunch, or dinner has enough variety for you to find something you’re in the mood for.

The oceanfront dining view has a lot to play into here. Even better if you ate here for dinner and was able to watch the sunset during your meal. Space between tables was a little bit narrow, but I’m sure that the floor space is a premium when it comes to being on the waterfront.

The food certainly arrived quickly to the table, and our waitress came back numerous times to check on us during the meal.

All things considered, I think the pricing was pretty good for the food portions (just look at the fried rice!). If there was upcharge for being able to dine right on the water, I really couldn’t tell.