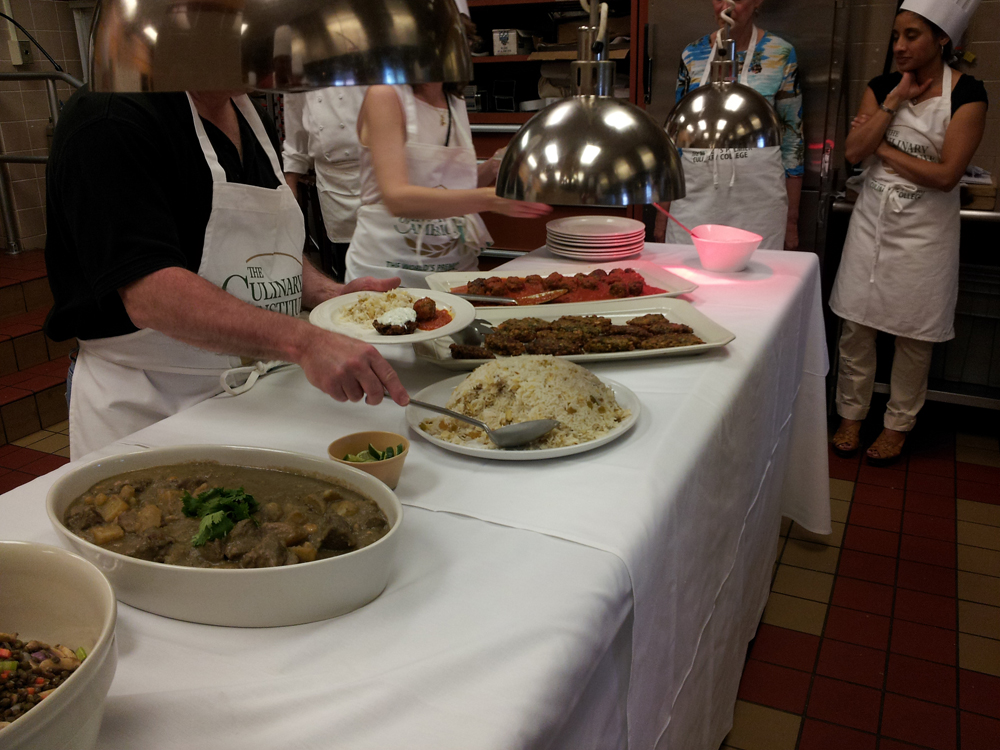 COOKING DECLASSIFIED – A DAY AT THE CIA

I have to say, a culinary school class seems miles apart from taking an engineering class. Things seem more hands-on, the subject material is interesting, it really works a whole different part of your brain. I feel like if I was taking classes like this during each weekday, I would have been SO much more motivated to go to class rather than dragging myself out to something like physics or differential equations (bleh).

Like I mentioned in my post from yesterday, today I got the opportunity to attend a cooking class at the Culinary Institute of America up in Hyde Park, NY. It was a solid hour and forty-five minute drive up there, so we all got up nice and early at around 5:45 a.m. to get ready and head on up north. I have to say that the campus is quite beautiful. Here is the view from their courtyard:

The class that I took today was called CIA Favorites, where we got to sample a number of different recipes from the CIA’s primary cookbook. Our class had a head chef instructor (who was also a professor at the CIA) as well as two sous chefs (CIA students) that were helping us during the entire 5-hour class period. For the duration of the class, all 14 of us would be helping to prepare a total of 10 separate dishes. Those 10 dishes were divided up into four separate teams to prepare and cook before the 1:00 p.m. lunchtime. Here is the complete menu:

I was a part of Team 4, so my two other team members and I were responsible for the Red Pepper Orzo, Panzanella, and Swordfish with a Tomato-Olive Ragù. All three dishes were very vegetable-intense, and required quite a bit of chopping, dicing, and slicing to prepare all of our ingredients before actually being able to cook them. I could imagine that this experience is nowhere near as intense as working in an actual restaurant kitchen, but I thought that the overall setting was probably about as close that I would get as just a pedestrian chef at home. There were multiple commercial-sized stovetops with six burners and hoods in the middle of the kitchen, with a huge assortment of pots and pans stacked up in the very back. The wire racks on either side of the kitchen was filled with spices or other liquid ingredients, and there were also commercial-sized three-basin sinks in both the front and the back of the kitchen.

It was amazing that even though the class started at 9:30 a.m. that once you looked up as the cooking started to wind down three hours had already flown by. Luckily, my team had kept a very good pace throughout the morning during prep and cooking, so as 1:00 p.m. approached we were in good shape to plate up our food. Some of the other teams were lagging behind a bit, but everyone pitched in to help them finish up since we were all hungry at that point from smelling everything cooking! Here is a look at the final products for the day:

Everything was served up buffet style, and it gave us all a chance to taste each other’s cooking as well as to sample flavors from a number of regions around the world. I have to say that, for beginner chefs like us and trying out these recipes for the first time, everyone did a really fantastic job. The food was executed very well and tasted really delicious. Nothing like sitting down after an intense 3.5 hours of cooking for a hearty meal. Here is a picture of me with my instructor, Chef Sergio Remolina. He was a really nice guy and actually really funny when he was helping us cook in the kitchen.

At the conclusion of the class, they let us keep the aprons and chef hats that we had used, and also gave us a copy of the CIA Cookbook, which contains a ton of really great recipes and some nice food photography to accompany it. I would certainly recommend taking this class, or other weekend classes that the CIA offers. I picked up on some great tips of how to improve my organization of things in the kitchen, various cooking techniques, and knife skills.  This class was a really fantastic experience with a wonderful opportunity to learn from the CIA instructors themselves.

Our second half of the day’s visit to one of the CIA’s restaurants, however, didn’t go as smoothly as the morning did.