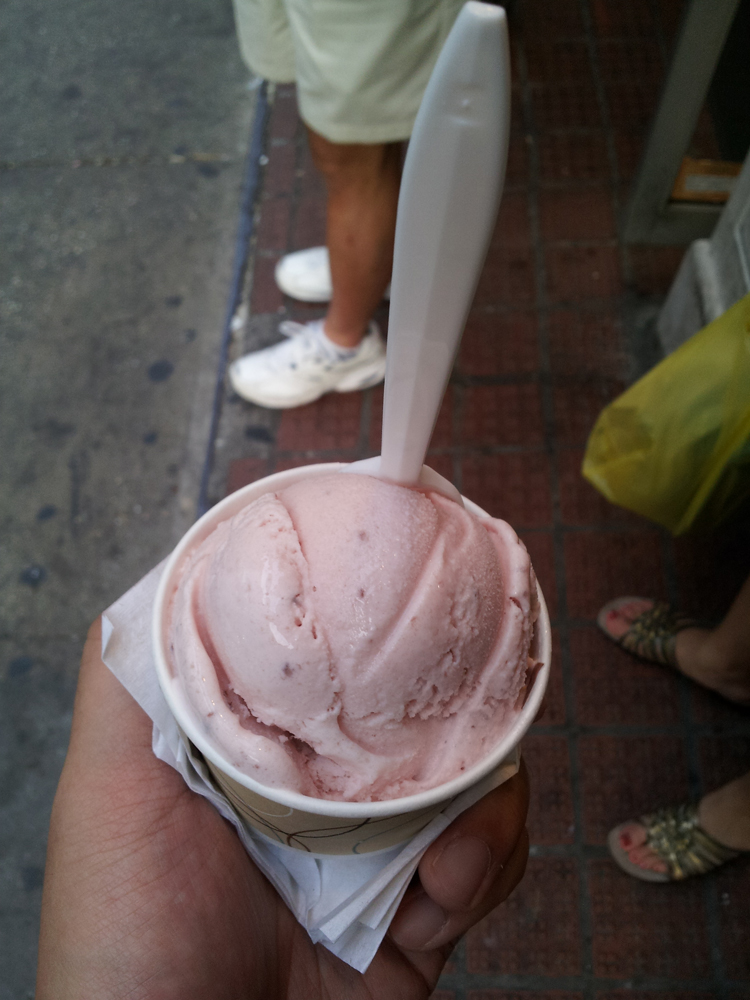 This past Labor Day weekend, we went out to NYC on Sunday to get together with my aunt, uncle, and grandpa. Both my aunt and uncle had flown in from out-of-town, so it was especially nice to see them since I don’t get to very often.

After having lunch at Tan Wong Restaurant (also now known as New Wong) on East Broadway, my uncle took us to an ice cream shop that was tucked away in the Chinatown side streets. This place must have been very famous for quite a while (literature posted in the window said that the place had been featured in numerous guides and TV shows) because the place was absolutely packed.

It is a pretty small shop with one aisle for people to stand in, either as they look over all the flavors in the display cases or place an order with one of the shop’s staff. Although the physical location was small, it packed over 30 different flavors of ice cream. You had your regular flavors (like vanilla, chocolate, Oreo, and strawberry) to more novelty flavors (like black sesame, coconut, red bean, and pineapple).

We actually took two trips here: once after lunch and once after dinner. The first visit I got the mint chocolate chip, and I was really impressed with how good it was. The mint chocolate chip flavor was well mixed together and was exactly what you would expect, but I was mostly impressed by the texture of the ice cream. I barely tasted any ice crystals in the ice cream itself, so it felt more like gelato than anything. But with the smooth texture of gelato mixed with the richness that you get with ice cream, it was absolutely delicious.

The second time that we went back I took the time to browse around the flavors more, since it wasn’t nearly as crowded as it was earlier during the afternoon. My eye caught pineapple as one of their flavors, and I started to get very excited. I hadn’t had pineapple ice cream since going to Hawaii in 1998 (that’s a minor story in itself). However, to my dismay, they said that they had run out of it, and I went with my backup, red bean ice cream. It was really good, with nice red bean flavor and natural sweetness, but wasn’t extremely over-the-top, which I liked. It was just as creamy as the mint chocolate chip that I had earlier that day.

The Chinatown Ice Cream Factory serves up some great ice cream and an eclectic selection of flavors. It’s a solid destination for some nice refreshments on a hot day. If you’re like me and eat ice cream even in the wintertime (some people ask how can I eat ice cream with it being so cold outside) then it’s a place to enjoy anytime of the year.

Here are my rankings for Chinatown Ice Cream Factory:

Food: 5 / 5
The ice cream has a fantastic texture and the flavor variety makes your mouth water.

Atmosphere: –
It’s a small storefront designed without the intention of fostering a dining atmosphere. You get your ice cream and go eat it on the streetside. Waste bins are thankfully provided right outside their door so you don’t have to go hunt down a trashcan to throw your stuff away.

Service: 4.5 / 5
There isn’t really an organized “next-in-line” style of queuing to order your ice cream. It’s pretty much if you’re ready, walk up to the counter to place your order. They are very quick about getting people in and out though.

Price: 4 / 5
It’s dessert and it’s in New York City, so it’s kind of expected that it might run a little more on the expensive side. However, I think that it is well worth the price, as you’ll be more than satisfied by the time you reach the end of your ice cream cup.