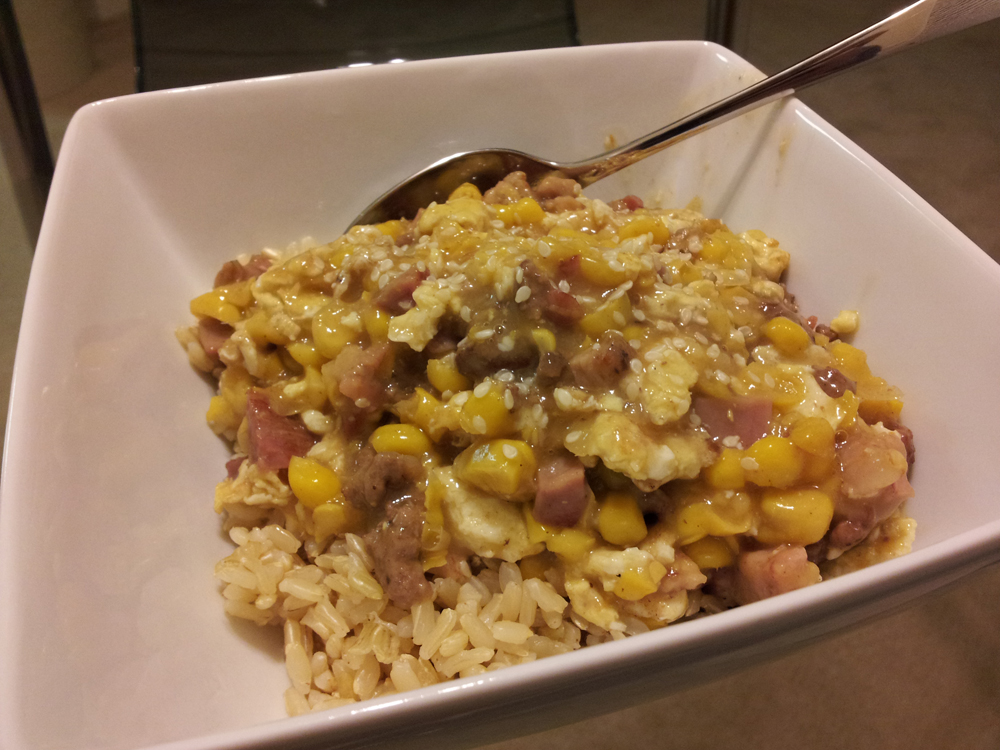 When I was growing up, this beef with cream-style corn dish was something that my dad made from time-to-time. It’s another one of those dishes that, at its core, consists of only a few key ingredients to put together: beef, corn, egg, and rice. I recently asked my dad if this dish was something inspired from Chinese food, and he said it wasn’t. It was more along the lines of something that he put together and it tasted pretty good. Now, he has passed it on to me and I also enjoy making this dish for a quick and flavorful meal.

Beef with Cream-Style Corn, Served over Rice
Makes about 2 – 3 servings

The rice will be the thing that takes the longest to cook, so start off tackling that. A general rule of thumb for rice is a 1:2 ratio, rice to water. With the 1 cup of rice in the rice, use 2 cups of water (reflected in the ingredients list). I use brown rice, and that stuff really likes to be temperamental. From my experience, brown rice tends to take a little more water to make it softer, so put in another 1/4 cup if that’s the route you’re going for.

Cook the rice in a medium saucepan by adding the rice and the water, bringing the mixture to a boil, and then letting it sit for about 20 – 30 minutes (depending on when all the water has been soaked up by the rice. If you have a rice cooker, the process is as simple as pushing a button, but either method should give you good rice.

Once the water level inside the pot has settled pretty much to the very top layer of the rice, go ahead and fire up the stove to medium-high to start cooking the rest of the items. First, cook the ground beef by tearing into little chunks when you drop it into the pan. Season with some salt and cook until you’ve just browned all the meat. Then, put that into a bowl and set aside. We’ll continue to cook the meat later, so that’s why you want to take it off the stove early; otherwise, you’ll end up with really tough, overcooked beef in the end.

Next, open up the can of the corn and set it next to the stove. Crack the eggs directly into the pan and start to cook those by using a spatula to continually stir them in the pan. Just when all of the egg has been cooked (no more raw egg floating around), pour in the can of corn as well as the beef. At this point, reduce the heat down to medium and stir together all of the mixture. Add in some more salt and taste it until you’re satisfied with the result. By now, the rice should be done, so spoon some of that into a bowl, scoop up the beef and corn mixture right on top, and you’ve got yourself a meal!