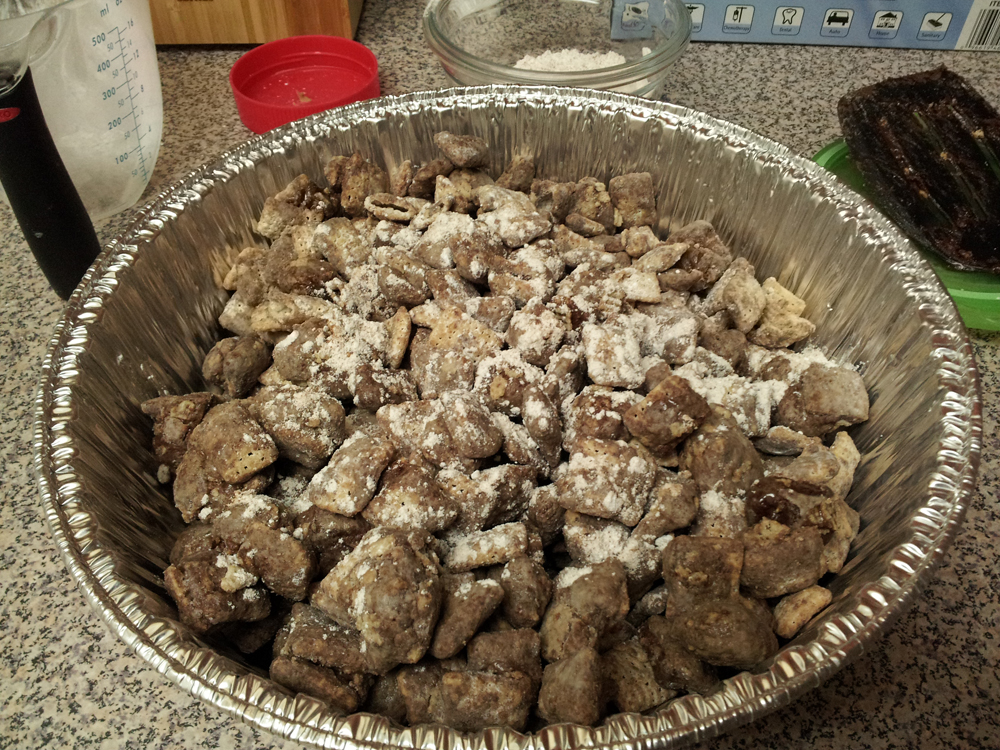 Last week, we had a potluck holiday party at work, and I had been racking my brain about what to bring in. But then I remembered that back at school every time around holiday season, the dining courts would always have this popular treat sitting right at the dessert counter. When I first brought up the idea of puppy chow, some people seemed very confused (I guess that puppy chow is more of a Midwest name for this dessert). Once I mentioned Muddy Buddies, others started to catch on. With chocolate, peanut butter, powdered sugar, and Chex, what possibly is there not to love?

This is my second run making it. A lot less clumpy this time.

An overview of the sugary treat.

A closer look at those morsels of goodness.

About halfway through mixing the Chex and chocolate / peanut butter.

In a large saucepan, melt the butter over low heat. After that, add in your chocolate chips and peanut butter. Once that is partially melted, add in the vanilla extract and continue to stir. Once it is fully melted to the point that you can stir smoothly, start to add in the Rice Chex and coat the cereal. Try to mix the Chex lightly, as if they start to break apart during the stirring process it will start to clump up together (like how mine turned out the first time). I think that I might not have melted down the chocolate enough, since it started to solidify soon after I started mixing in the cereal. Put the cereal mixture into the refrigerator for about 5 minutes to let it cool off a bit. If you don’t, the powdered sugar will just melt into the chocolate, and you will end up needing to use more sugar to coat.

With the cereal cooled, take out a large mixing bowl (a large freezer bag would work as well) and coat the inside with some powdered sugar. Begin to add some of the cereal mixture into the bowl and sprinkle some more powdered sugar on top. Shake up the mixture until it begins to get evenly coated, adding in more powdered sugar along the way. I had too much cereal to coat everything all at once, so I did it in multiple batches. Use your own discretion as to when you think that the cereal looks coated enough.

After it’s all done, put it all into a bowl and sit back, relax, and enjoy the sugar rush!

I made a second batch of these to bring into work today, as it had been highly requested by my co-workers! This time, I used a covered saucepan in order to help melt everything together. The top layer will be very smooth, but for some reason the bottom layer was still more on the solid side. I did decide to pour the mixture right into a mixing bowl with the Chex, and then enlisted the help of the microwave in order to soften the remaining chocolate mixture. I put it in for about one minute on medium power, and that softened it enough to let me start stirring and coating the cereal with the chocolate mixture.

In an effort to reduce the amount of clumping, I decided to break apart the clumps by hand using some latex gloves. Sprinkling on the powdered sugar after breaking up the larger chunks allowed for me to get a much more uniform look to the dessert.