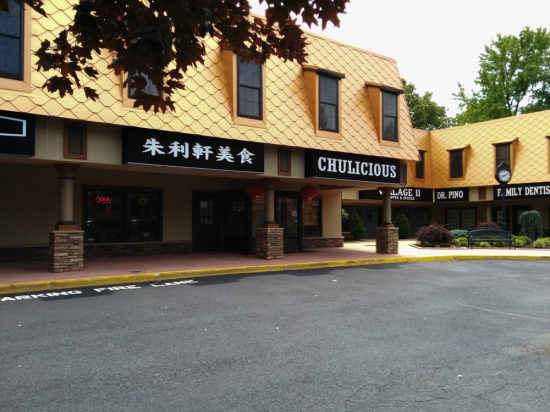 But now, back to the review at hand for a restaurant I’ve been aiming to try for quite some time now.

It was about a year ago that I was visiting my friend Jason, who was living up in Mount Laurel at the time, when we drove by a shopping plaza and I spotted a new sign getting hung up. We swung into the plaza to take a closer look and there it was, in big letters: CHULICIOUS (stylized as CHUlicious). Ever since then, my friends have always told me I had to go back to review the place just because of the namesake. And so, during my drive up to central NJ this time around, I made a quick detour to stop by and check the place out.

After walking into the restaurant, it felt lot smaller than it appeared from the outside; it could still seat around 50 people, so certainly able to accommodate a nice sized crowd. The interior was nicely decorated with art on the walls and overall mood lighting dimmed down a little, save for lamps hanging above the dining tables. I arrived to the restaurant around 1:30 in the afternoon, and the dining room was fairly quiet with only a few people. (Perhaps I got lucky and avoided the Saturday lunch rush?) The waitress led me to a table and I began to look over the menu after sitting down.

CHUlicious’s menu focuses primarily on both Taiwanese and Szechuan styles of Chinese food. I was excited about trying the food, since these two styles of Chinese food I had the least exposure to. I had done a little menu “sneak preview” and read some reviews on dishes the night before, so I picked out a few things that people had spoken very highly about to give a try. My parents had asked for me to bring some takeout back home with me, so that turned into an opportunity to order some extra dishes for a nice sample of the menu.

I was pretty hungry by the time that I got to the restaurant, since I had only eaten a yogurt before starting my 3.5 hour drive up. I ordered the Crystal Wontons appetizer to start things off, followed by the Combination Fried Rice and Salt Baked Chicken entrées. The dishes I was getting to-go: CHUlicious Sandwich, Dan Dan Noodles, Hot Green Pepper Beef, and the Basil Chicken.

The Szechuan-style Crystal Wontons come out in a bowl of six, immersed in a chili oil infused with garlic flavors and topped with chopped scallions. The wontons were freshly cooked and the flavors soaked right into the soft wrappers. That chili oil certainly gives it a kick, and eating a few of the wontons will probably feel like a small fire is starting to slowly burn in your mouth.

The Combination Fried Rice and Salt Baked Chicken both arrived not too long after the wontons, and being the hungry person that I was, I started digging right in. The fried rice was truly made up of a lot of components: roast pork, beef, chicken, shrimp, eggs, scallions, onions, and carrots were what I was able to pick out. It had good flavor and didn’t taste very oily or drenched in soy sauce like some other fried rices I’ve had before. The Salt Baked Chicken was a pleasant surprise for me; it was the first time that I tried the dish and I really enjoyed it. Crispy, savory, and a little hint of sweet, the chicken is considered the “Taiwanese popcorn chicken” by some, and very popular at Taiwanese night markets. I had a hard time restraining myself from eating the entire basket, since I had to leave some for my parents to try!

Out of the four dishes that I tried later that night with my parents, the one that stood out the most, by far, was the Basil Chicken. Chunks of chicken thighs cooked with fresh basil leaves and a number of spices and sauces, it had such a great aroma when you first took off the container lid. The sweet and savory flavors really stood out at the forefront, with slight garlic and ginger flavors that lingered behind as an aftertaste. A plate of that chicken and some rice would certainly make me a very happy camper.

My initial impression from sampling a number of CHUlicious’s dishes remains very positive. All of the food that my parents and I tried were tasty, with some standing out more than others. The dining ambiance is very pleasant, and the service was friendly and efficient. From one Chu to another, I say keep up the good work!

Let’s now take a look at the CHUlicious Dish Spotlight. Asterisks (*) below mark my recommended dishes. 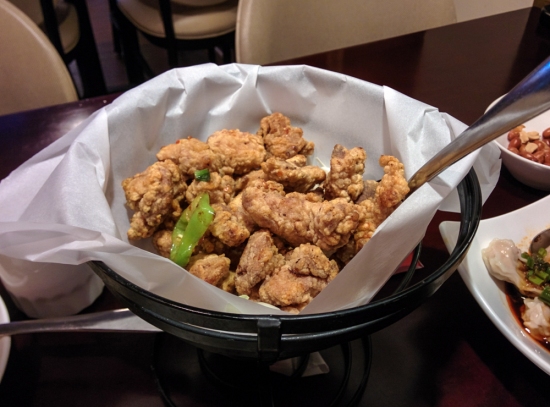 ** Salt Baked Chicken **
Deep-fried chunks of chicken breasts and thighs that have a tasty salt and pepper flavor, with a lingering sweetness on the back end. A very popular dish at Taiwanese night markets. 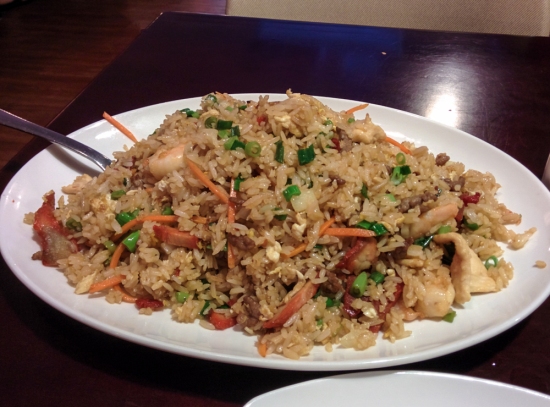 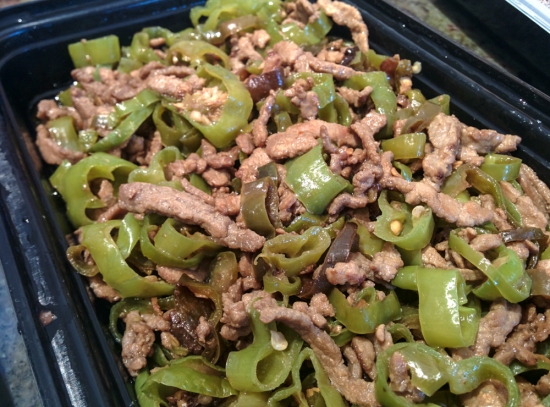 Hot Green Pepper w/ Beef
A truly spicy dish that will most likely have you reaching for that glass of water. Chopped green chili peppers stir-fried with small beef strips, garlic, and ground black pepper.

And finally, here are my rankings for CHUlicious:

With an excellent selection between Taiwanese and Szechuan dishes, CHUlicious draws on strong flavors to deliver great tasting food while tucked away in this suburban neighborhood shopping plaza.

The interior of the restaurant was decorated very nicely, and there was even some Chinese music playing softly in the background to add to the ambiance. The slightly dimmed lighting gave the place a more elegant feel.

The food came out of the kitchen relatively quickly, and the waitress was around frequently to check up and see if I needed anything else for my meal.

I thought that some of the dishes seemed a little pricey. I would probably be more accepting of those prices if the restaurant was inside a larger city like Philadelphia, but not if it was out in the suburbs.