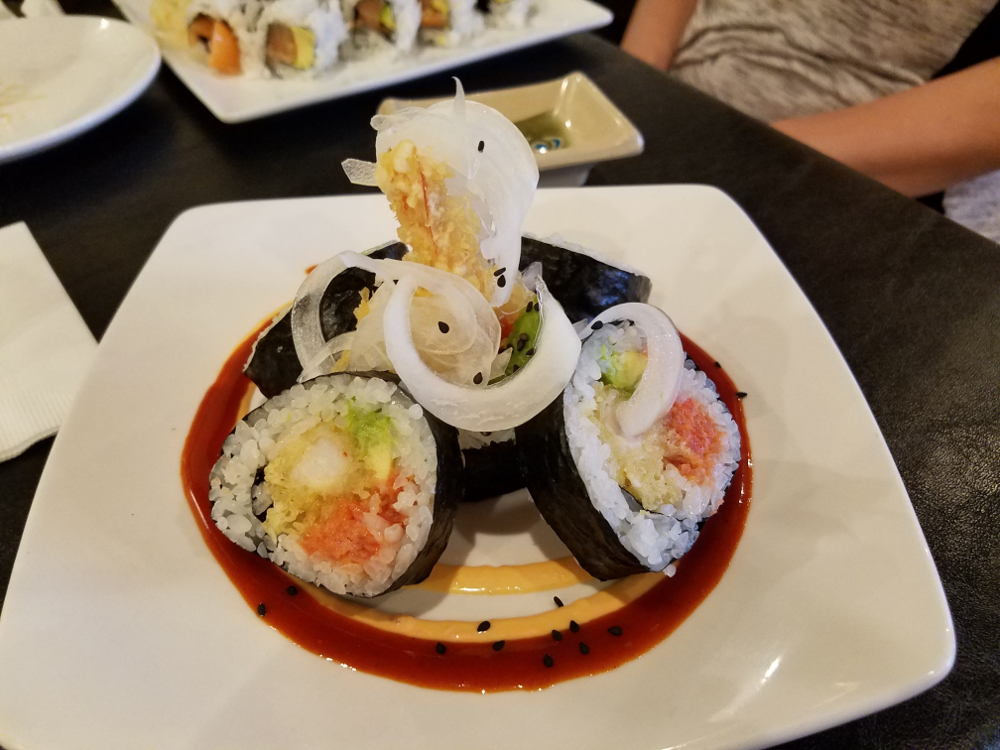 During the planning phases for my family’s Hawaii trip, we reached out to my cousin Connie, who had been over to the islands several times, for recommendations on local restaurants as well as types of cuisine to look for while on the trip. One of things she recommended was Japanese food; my family loves sushi, so it was a perfect fit to add a few sushi restaurants to the itinerary. Monstera was a well-rated restaurant that was only a ten minute drive away from our resort, so we decided to check it out for our second full day on the Big Island.

Even though I had put in an OpenTable reservation for 5:30, it turns out we didn’t need it. The restaurant didn’t open until then, and there were only a few other groups waiting to be seated before we arrived. The interior of the restaurant felt very modern, using a lot of glass decorations. One of my favorite decorative areas was in the back of the dining room, where a wide picture of a bamboo forest was mounted underneath a suspended bamboo overhang. Ample lighting around the entire restaurant contrasted with the dark dining tables and floors.

It had been a while since I’d eaten some sushi, so my craving for it had definitely built up. Between me and my mom, we decided to split four rolls in an effort to maximize the sushi we could try from the menu. We ordered the Volcano Roll, Norio’s Original 69 Roll, Negitoro Roll, and the Salmon Avocado Roll to get a good spread between salmon, tuna, and shrimp tempura.

Monstera, in addition to sushi and sashimi, also offers a small variety of hot & cold noodle dishes, using soba or udon noodles. My brother has always been inclined to order noodle dishes at restaurants, so he went with the Monstera Udon to give it a shot. My dad opted for his usual sashimi dinner plate to try out the restaurant’s sampling of fresh fish.

Since we were one of the first parties to get seated, the chefs were able to start on our order right away. It was about twenty minutes or so before all the food arrived, and we were high on anticipation to start our sampling of Japanese food in Hawaii.

Presentation-wise, it was definitely a tale of two dishes. My Volcano Roll was plated nicely, with the roll pieces arranged in the shape of, well, a volcano. The shrimp tempura end piece was in the middle and stuck out vertically, which was a nice play on visuals. The Salmon Avocado roll, however, left much to be desired. The packed rice around the seaweed was broken up on some of the pieces, and the seaweed wrapping itself was rather deformed in shape as well. The black sesame seed garnish that was meant to be on the top was also unevenly distributed onto the sides.

For the two rolls that I had picked (Volcano and Norio’s Original 69), I thought they both had good flavor. For the Norio’s, the savory flavor from the baked unagi and tobiko balanced well with the snow crab wrapped inside. Add in some panko flakes for some crunch and I think that roll would be perfectly balanced. The Volcano had a good mix between the shrimp tempura and spicy tuna, but I wish there had been more of the spicy aioli available either on the plate or the roll to give it that added kick. I thought the Negitoro and Salmon Avocado Rolls, which were not as busy as the other two, were able to let the taste and freshness of the fish shine.

My brother did express his disappointment with his Monstera Udon, saying that the combination was rather plain in flavor and the chicken was overcooked. Something also didn’t agree with his stomach, although it’s unknown if that could be attributed to something that he had eaten earlier.

While my family did have high expectations for this place coming in, I think unfortunately it fell a little short when stacking it up to other Japanese places we’ve eaten at before. The pricing was a little expensive for the quantity of fish you get in the sushi / sashimi, and the flavors were rather hit or miss. I’m unsure if I would return again in the future, given there are a number of other local dining options available that might get you better value. 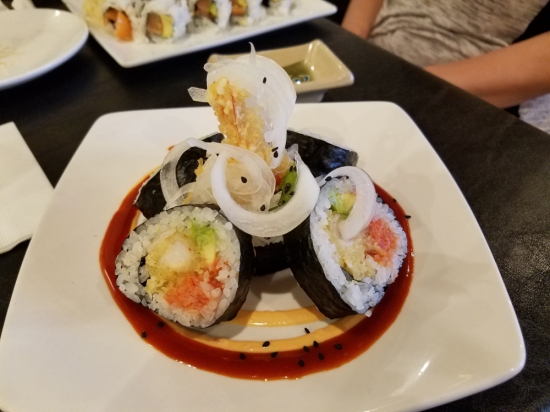 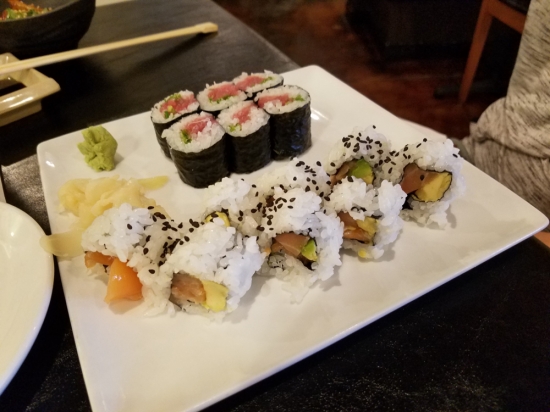 And finally, here are my rankings for Monstera Noodles & Sushi:

While the fish tasted fresh, inconsistency with the presentation quality and taste made the sushi less enjoyable. My brother’s Monstera Udon dish was also rather plain in flavor. The selection of rolls do feature a nice variety of seafood, depending on what you’re in the mood for.

I really enjoyed the modern feel of the dining area décor, coupled with the brighter ambient lighting. That bamboo picture in the back (mentioned above) was also a really neat design element. The front wall of the restaurant was also made entirely of glass panes, which let in a lot of natural light to the restaurant.

Our waitress was very accommodating and returned various times throughout the meal to ask how the food tasted and refill our waters. We also didn’t have to wait very long before our food arrived at the table.

Some of the specialty rolls I thought were a little pricey, with a select few being fairly priced. My dad’s sashimi dinner only came with 15 pieces for the $48; in the past, other restaurants have usually served at least 20 for around the same price point. My brother’s udon dish being priced at $20, however, was pretty high for something that tasted average at best.