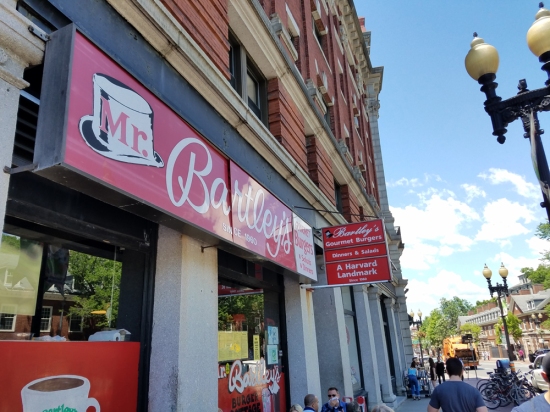 The summer of 2006 was the last time that I was up in the Cambridge area, doing college visits at Harvard and MIT. As a rising high school junior at the time, I was starting my visit process early to try and get a feel for some schools before applying. In between checking out the two campuses, my family ended up in Harvard Square, where we were looking for a place to grab some lunch.

Our family friends, the Sugimoras, had a son who was studying oceanography at MIT at the time, and recommended giving Mr. Bartley’s Burger Cottage a try. The burger that I ate that day must have made quite an impression on my 16-year-old palate, since I still remembered that restaurant to this day. That’s precisely why, 10 years later, when my friend Jason and I were in the Boston area for the weekend, I mentioned we should hit this place up.

The inside of the restaurant was just as cramped as I remember, with every inch of dining space spent packing in as many hungry customers as possible. For us, it was certainly no exception. We squeezed into this two-person table pushed up against the back wall of the dining area, with another two-person table set up next to us spaced out three inches. It made for a cozy dining experience, that’s for sure. It is, however, part of the Mr. Bartley’s experience, and I could see how having a large group could get a little tricky if you’re wanting to dine in.

If you’re an indecisive person, then you would be mortified by looking at the burger menu that they’ve got.

In what appears to be a sea of choices, there are so many different burger combinations that sound so delicious. I was torn between probably four different burgers, and it came down to a game-time decision for me to choose. I ended up going with the “Hillary Clinton” — burger topped with muenster cheese, mushrooms, and bacon. Jason went with the “Legalize It” — burger topped with a heaping mound of marinara sauce, mozzarella cheese, mushrooms, and onions. We also decided to get things going with an order of fried pickles as well, after being hungry from walking around the MIT campus.

In hindsight, I probably played it a little safe with my burger choice. The next time I might go with some wild like the “Julian Edelman” — topped with bacon, american cheese, BBQ sauce, cole slaw, and guacamole. Or maybe even something like the “LeBron James” — topped with bacon and ghost pepper mac & cheese. How about the “Diane Paulus” instead — topped with cheddar cheese, bacon, maple syrup, and a fried egg. As you can see, it’s pretty tempting to consider ordering a few different burgers just to try. You then might be eating leftovers for the rest of the week though!

It wasn’t too long before our order of fried pickles came our way, and we started devouring them. They were lightly battered and had a nice crunch to them, paired with a side of BBQ sauce for some smoky sweet flavor. The burgers came up not too long after that, and the plates were just as massive as I remembered them to be. Jason’s Legalize It burger was absolutely overflowing with marinara sauce on the plate, and my Hillary Clinton burger was stacked high with the lettuce, bacon, mushrooms, and cheese. I had to go ahead and flatten my burger a little bit to make sure that I could fit a bite in my mouth.

All of the ingredients tasted very fresh, with the bacon and muenster cheese adding a great savory flavor to the mix. No condiments needed here. For a little bonus crunch, I ended up putting a few of the onion rings inside the burger as well. Jason echoed a similar opinion about his burger, with the marinara sauce (albeit being an interesting addition to a burger) tying everything together very well.

This is probably the first time I’ve been back to a restaurant nearly ten years after my initial visit. I was certainly glad to see that things really haven’t changed in that timespan, and that the burgers were just as good (and had crazy combinations) as I remembered. If you happen to find yourself in the area and craving a nice, hearty burger, take a stop on by Mr. Bartley’s Burger Cottage.

And finally, here are my rankings for Mr. Bartley’s Burger Cottage:

If you like options, this is the place to be. With 30 different burgers to choose from, it will definitely be a toss-up about what you want to order. Fresh ingredients and great flavor combinations make for some good eats here.

You’ll get packed in like a can of sardines if you’re dining in, that’s for sure. Some people might not mind it, but I personally would prefer just a little bit more breathing room. Space is certainly at a premium, however, and the restaurant uses every inch of it.

We had a very nice waitress during our meal, who, despite it being very busy in the restaurant, stopped by frequently to ask us how everything was. The food was also flying out of the kitchen, with us getting our burgers in no time.

Some of the burgers definitely run a little bit on the expensive side, with the most expensive topping out at just over $20.