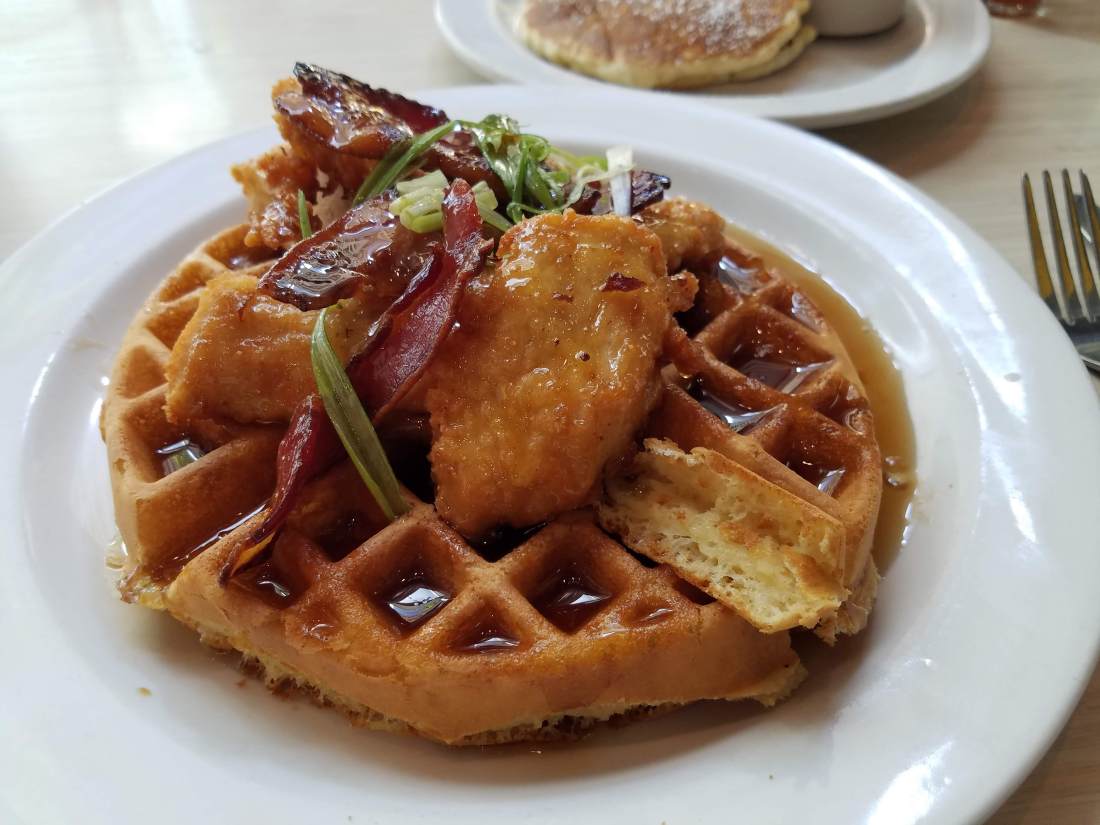 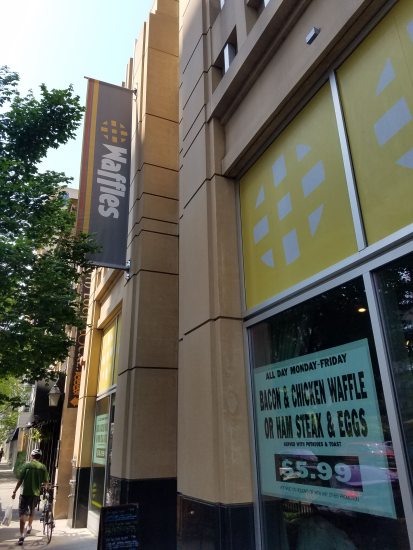 It was day two of our Chicago weekend trip, and on the agenda was venturing out into the downtown area. We had put together a loose plan to check out the sights near Millennium Park before our guided tour of the Art Institute museum later that afternoon. My friend Susan had visited Chicago a couple of weekends prior, and when we talked, she recommended checking out a place called Chicago Waffles. That morning offered the best opportunity during the trip to get some brunch to start off the day, so we took a Lyft to check out the downtown location.

We stepped inside and found the place already bustling with customers, despite it only being around 10:00 a.m. There was kind of a diner-ish vibe to the décor, with a countertop seating area complete with round stools in the back and metallic furniture and tabletops in the remainder of the restaurant. It was a relatively quick wait before they set us up at a table right in front of one of the tall glass windows looking out to the street.

There was certainly no shortage of food options to choose from, with a long list of waffles (no surprise there), pancakes, omelettes, French toast, and skillets. However, I’d certainly be remiss if I came to a place known for their waffles and didn’t try those out. So, I ended up going with the waffle item that caught my eye the most: the Bacon & Chicken Waffle. When it comes to chicken and waffles, I just find that I have a hard time saying no.

Even though the décor was meant to feel like a diner, I’m not sure if I was still getting more of an “industrial” vibe as well from some of the other elements in the dining area. There was an open ceiling above where you could see the A/C duct runs (reminded me of Chipotle) and then also metal tables and chairs. Coupled with the bright colored paint scheme on the walls, all of these design elements felt thrown together and didn’t fully harmonize that well.

It wasn’t before long that our food started arriving from the kitchen, a procession of plates that ended with me receiving my Bacon & Chicken Waffle plate. On first glance, I was pretty excited to dig in. Unfortunately, however, this was an instance where looks were deceiving.

Rotating the dish around to the opposite side showed that there was a small chunk of ripped waffle from the previous batch that got stuck to mine. The dish was inundated with maple syrup, which ended up causing the waffle to get saturated and soggy. The bacon and chicken, on the other hand, both turned out well. The bacon was nice and crispy, while the chicken was moist on the inside and didn’t suffer too much from getting drowned in maple syrup.

The dish sounded great on paper; I’m not sure if it was an off-day or something, but the plating and execution didn’t really do the dish justice during our visit. Serving the maple syrup in a container on the side as well as finely chopping up the scallions for garnish instead of long strands would have been two adjustments that would have helped the dish quite a bit.

Fueling up with some brunch for our day downtown was what led us to Chicago Waffles, and for the most part, it got the job done. I don’t think I ended up being hungry until later in the afternoon. But the dishes overall lacked a little bit on the execution side of things, which is why we ended up walking away full, but not satisfied.

And finally, here are my rankings for Chicago Waffles:

There’s certainly a lot of choices on the menu, but the poor execution on my Bacon & Chicken Waffle dish echoed the group’s sentiment that the food was mediocre at best.

Conflicting décor elements detracted from the overall ambiance of the dining area.

Our waitress would swing by our table relatively often to check back on us, seeing how we were doing with drink refills. Service coming out of the kitchen also never felt like it was taking too long.

I suppose that you’ll experience an upcharge just for being right in the prime downtown area. But all things considered, the prices weren’t too terrible.