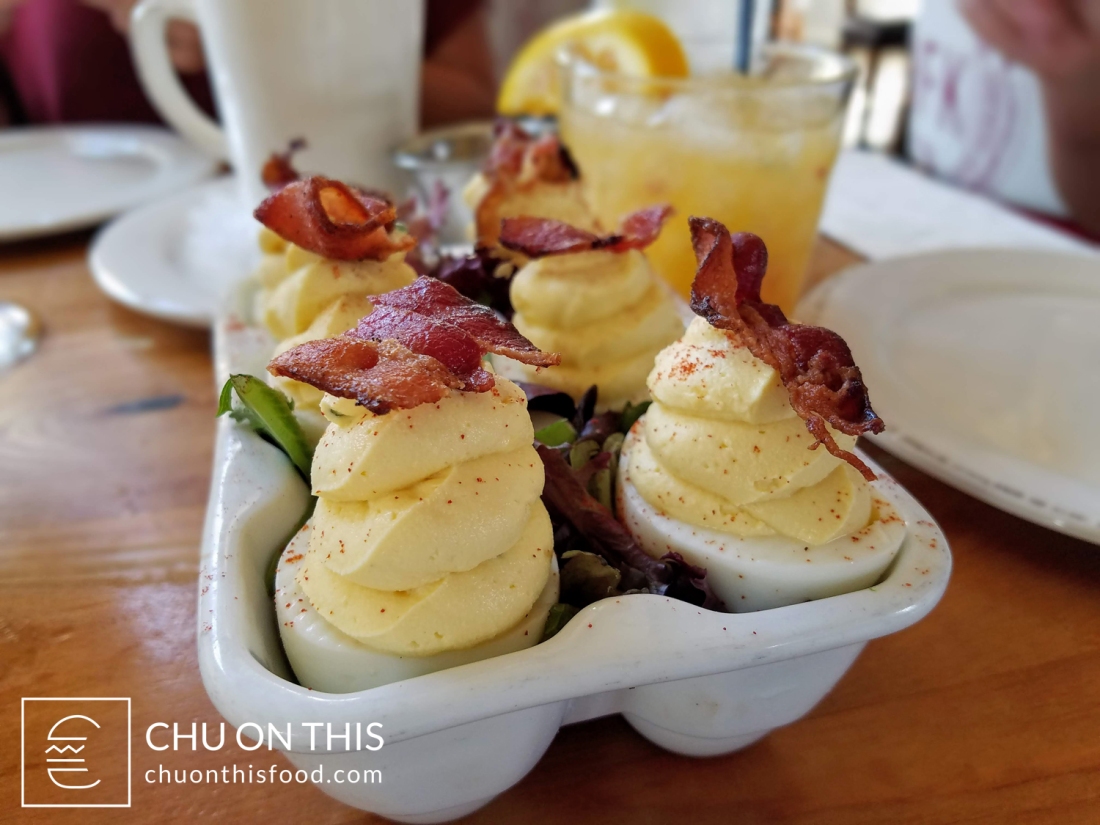 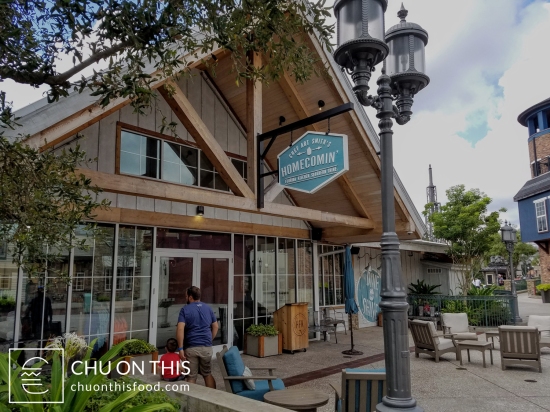 During a random side conversation at work, my friend Jared talked about his recent experience eating at Chef Art Smith’s Homecomin’ and how much he and his family had enjoyed it. That conversation also happened to coincide with when I was talking with my friends Carlos and Sara about planning a trip up to Epcot for the Food & Wine Festival. So when we finalized our plans for heading up to the area a couple of weekends ago, we made sure to put a visit to Homecomin’ on the agenda.

Waking up after spending 14 hours in Epcot stuffing my face, I was amazed to find that I still had room to eat more food. Our hotel was just down the street from Disney Springs, so it was a quick hop over to get the car parked before we walked the rest of the way to the restaurant. Homecomin’ is located almost right in the middle of Disney Springs, and sits right on the man-made waterway running through the outdoor complex.

When you first walk into the restaurant, you immediately get immersed into that Southern atmosphere that transports you away from the bustling Disney Springs crowds. With large, open windows that bring in an abundance of natural light and wood elements used throughout the dining area’s décor, the interior was built to make you feel like you’re relaxing inside a modern barn house.

Sunday brunch service was underway not too long after we arrived for our 10:00 a.m. reservation, and we were able to get seated immediately. Definitely come early, because by the time that we left about an hour later, there was already a line of people waiting to get seated. The brunch menu was loaded with Southern classics, like biscuits & gravy, fried chicken, and shrimp & grits. But there were also a number of other dish variations that sounded fantastic as well, such as chicken & biscuits, a short rib hash, or even a hush puppy benedict with fried chicken.

I was so tempted to order one of everything on the menu to try, but some restraint and me remembering how much food I had eaten less than 24 hours prior convinced me otherwise. The one dish, however, that Jared mentioned not to miss was the fried chicken & doughnuts. Two pieces of fried chicken served with house-made sugar doughnuts and a side order of bacon, that dish didn’t need to sell itself anymore to me. I like eating every one of those items, so that was an easy decision! To help complement our entrées, we also ordered two appetizers, consisting of the cheddar biscuits and deviled eggs. 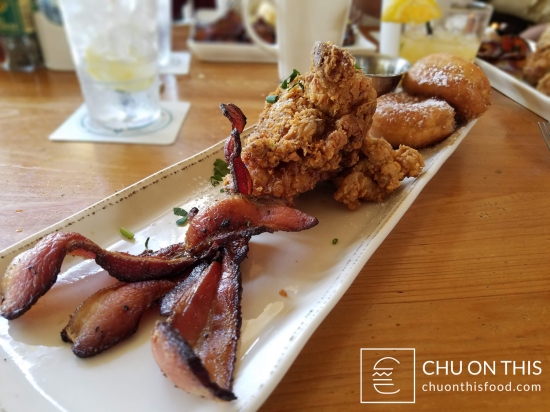 As I’ve mentioned before in some previous reviews, I’m an advocate of the open kitchen concept. It allows you, as a diner, to connect with the cooks working hard in the kitchen to help serve up your meals. Homecomin’ had a similar setup, where the wall adjacent to the dining area had a large cut-out to facilitate a window where food was served and ready to be picked up to head out to the tables. If you were seated close to that area, you might be lucky enough to get some of the smells emanating out from the kitchen that get your mouth watering.

I recognized Chef Art Smith from his time on the television show Top Chef: Masters as well as his former position working as Oprah’s personal chef. I was surprised to find out that he grew up as a Florida native and also participated in the Walt Disney culinary internship program. In the hallway leading over to the restrooms, there are framed pictures and letters that provide glimpses into Chef Smith’s culinary accomplishments. Letters from the White House to cook for foreign dignitaries and newspaper clippings of his restaurant openings were among the things on display. With Chef Smith starting his culinary journey just down the road in Walt Disney Magic Kingdom, it was a fitting name for the restaurant to mark his return to the area.

Our appetizers rolled out of the kitchen first, with the smell of the fresh biscuits wafting around the table as they were set down. I was also extremely impressed at the presentation of the deviled eggs; they were served in a ceramic version of a half dozen egg holder, with a bed of arugula leaves cushioning each egg resting inside. The whipped egg yolk was piped out into miniature towers on all the eggs, finished with a dash of paprika and pieces of bacon. It certainly takes the cake for the most creative way I’ve seen deviled eggs served at a restaurant.

Turning our attention over to the biscuits, each one was amazing, with the light and fluffy texture balanced out by the savory flavors from the cheddar cheese. The blackberry fig jam complemented the biscuits well, providing a tart and sweet flavor. The aftertaste of the jam had a bit of a spicy kick to it too, a surprisingly good counter to the richness of the biscuits. And those deviled eggs, they tasted just as great as they looked. Pillowy texture to the yolk mixture and great flavor, with the bacon providing a crunchiness amongst all the soft elements. It would have been very easy to just crush that entire half dozen of deviled eggs by myself.

Just as we were finishing up the deviled eggs, our entrées arrived from the kitchen. On a rectangular plate, the chicken, doughnuts, and bacon were all neatly organized, ready for me to dive right in. I started with a sample of the bacon, nice and crispy with a slightly sweet finish to it. Next up were the mini yeast doughnuts, which rose very well during the frying process to give them a nice, soft texture on the inside, finished off with a dusting of powdered sugar. It was also served with a spiced cane syrup that, despite it being another layer of sweet flavor, complemented the existing sugar nicely.

Last, but not least, it was the star of the show: the fried chicken. The two pieces that I received were one light meat (chicken breast) and one dark meat (chicken thigh). The breading was done very well, with a thin layer on the outside, but still providing that crunchy and flaky textures. The chicken breast was served bone-in, and I was impressed that the entire piece made up mostly of meat. (It’s sometimes a gamble when it comes to fried chicken breast.) All three items on their own were already delicious; put them all together and it made for a great main dish that I thoroughly enjoyed.

Definitely need to give credit to my friend Jared for recommending another great dining destination right in Disney Springs. The food offerings were excellent, the waitstaff were friendly, and the overall dining atmosphere was very laid back, coupled with that Southern charm. I’m always a fan of Sunday brunch, and Homecomin’ did it up very well. I’m certainly looking forward to returning the next time to sample the rest of the menu!

Let’s now take a look at the Homecomin’ Dish Spotlight. Asterisks (*) below mark my recommended dishes.

** Church Lady Deviled Eggs **
Deviled eggs served with a dash of paprika and pieces of bacon. 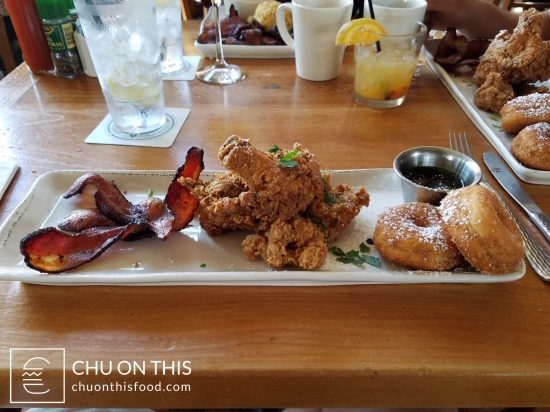 ** Fried Chicken & Doughnuts **
Two pieces of fried chicken, served with house-made sugar doughnuts and a side of pecan-smoked bacon.

And finally, here are my rankings for Homecomin’:

Every item we got had great flavors and stunning presentation. Although the brunch offerings are only one page, there is certainly enough variety to pick out what you’re in the mood for.

High ceilings, plenty of natural light, and the abundance of wood décor everywhere really made you feel immersed at a barn house in the countryside.

Our waiter, Andy, was pretty friendly and accommodating with questions we had on the menu. There were a few instances, however, of when we needed utensils or some more water, and we couldn’t find him in the dining area.

You’ll have to adjust your expectations on the food pricing, especially since it’s in a tourist area like Disney. But I think for the quality of food you get as well as the dining ambiance, the price is worth it.