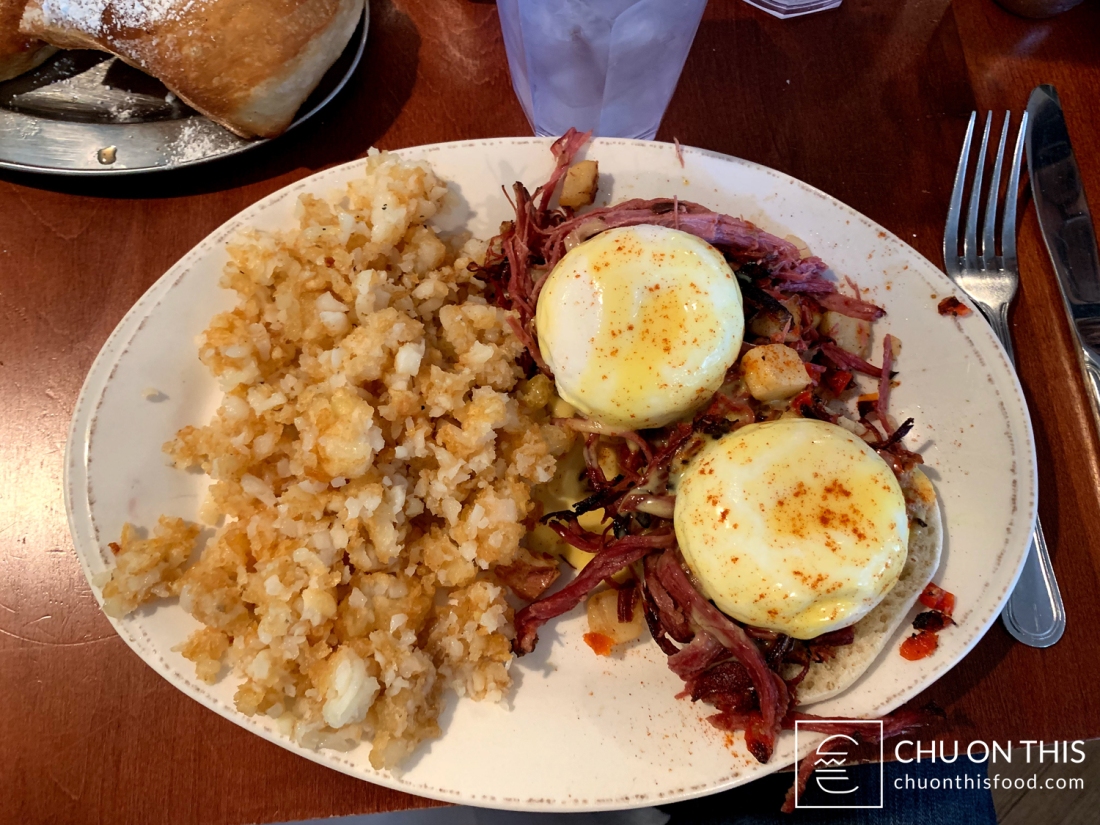 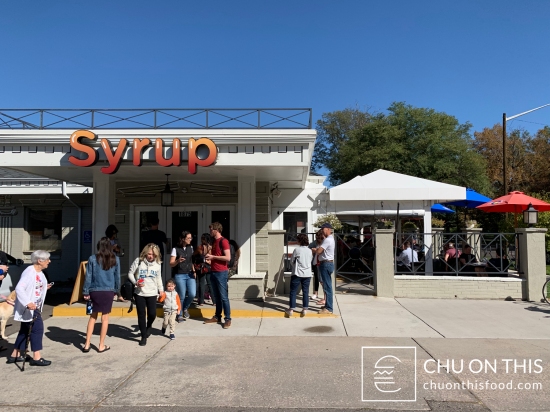 On the morning of our planned visit over to the Denver Zoo with my friends Andrew and Angie, we decided to look around for a place to pick up some brunch. Andrew mentioned a place called Syrup right next to City Park that he had been wanting to try; it also worked out really well since the zoo was walking distance from there. So we hopped onto some Lime rental scooters right outside their apartment and zipped off towards the restaurant.

10 minutes later after weaving our way around some neighborhood streets, we arrived to the front of the restaurant, where there was already a pretty sizeable crowd waiting for a table. It wasn’t all too bad, as we were quoted roughly a 30 minute wait. The staff ended up being able to turn tables faster than anticipated; it was probably closer to 20 minutes before we were getting shown to a table in the back of the restaurant.

Just by looking at the menu, you could tell that pancakes, waffles, and French toasts were this spot’s specialty. Not only did you get to choose what type of breakfast food to get, but the restaurant also offered eight different types of handcrafted syrups you could pour on top. If you aren’t in the mood for sweets, no need to panic: there is also a wide selection of omelettes or benedicts to browse through as well. 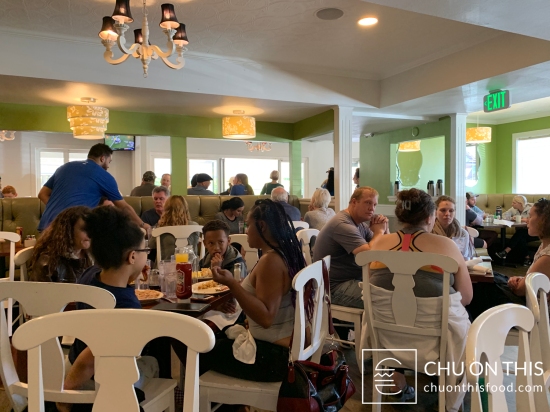 Since I’d been cutting back on dairy in my diet, that took the pancakes, waffles, and French toasts out of consideration (much to my dismay, as a lot of offerings were really calling my name). I typically go for the egg dishes when going out for breakfast, namely omelettes, but this time I decided to switch things up and looked over at the benedicts instead. The one that almost immediately caught my eye: The Cherry Creeker. Right in the description, it stated that it was the dish that made Syrup famous, so it became an easy choice for me. I had to see what this dish was all about.

Our waiter, Dakota, brought out our plate of beignets not too long after we had ordered our food. When we had asked him about choosing between the beignets or the waffle sliders, his strong recommendation for the former helped make our decision relatively easy. Fluffy fried dough that was rolled in cinnamon sugar, dusted with powdered sugar and served with their maple vanilla syrup on the side, these beignets were indeed the perfect starter for our meal. Each bite was light and I thought had just the right amount of sugar on there. Drizzle a little bit of that syrup on top and it was a hard piece of dough to put down. 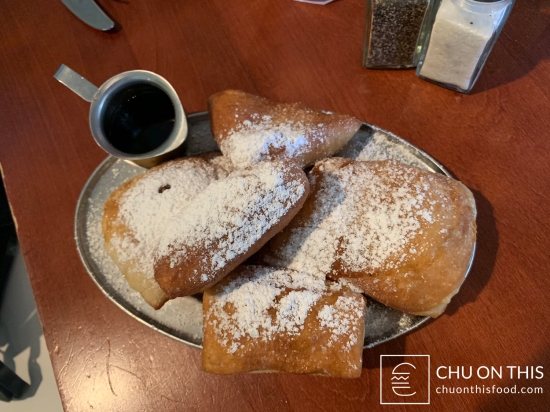 The rest of the food was not too far behind that, and visual first impressions of the Cherry Creeker eggs benedict did not disappoint. Two English muffin pieces were topped with slow-cooked corned beef hash and poached eggs, with Hollandaise sauce drizzled over the top and finished with a sprinkle of paprika. Their smashed tater tots took up the rest of the plate, a perfect vessel to help soak up some of that leftover egg and Hollandaise.

The eggs were poached perfectly, the yolk running off and blending together with the corned beef underneath and the English muffin. I was able to cut a piece that managed to capture all three components at once, and got a really nice blend between those savory and slightly smoky flavors. I actually hadn’t tried tater tots smashed up before, but I thought it was a great idea. It helped to give you that nice blend between crispy and soft potatoes.

Trying Syrup was a first-time experience for all of us, and I think collectively we walked away being very satisfied with our meal. The food certainly impressed, in the diversity of their offerings, portions of food, and flavors of their dishes. The service was actually relatively quick, despite the large brunch crowd on a late Sunday morning. Plan ahead to arrive a little early to try and beat the crowds for a table. But even if you get caught up in the wait, it’s time well spent for a hearty plate of food.

Let’s now take a look at the Syrup Dish Spotlight. Asterisks (*) below mark my recommended dishes. 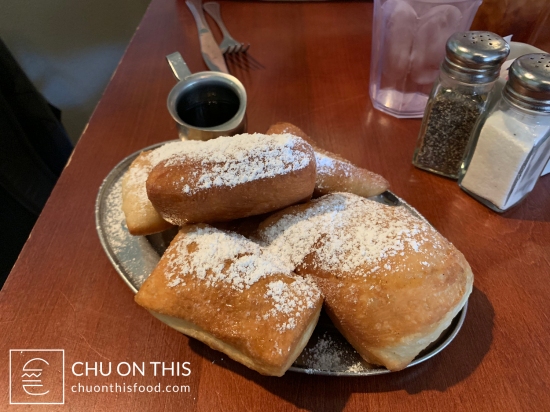 ** Beignets **
Fried dough squares rolled in cinnamon sugar and dusted with powdered sugar. Served with maple vanilla syrup on the side. 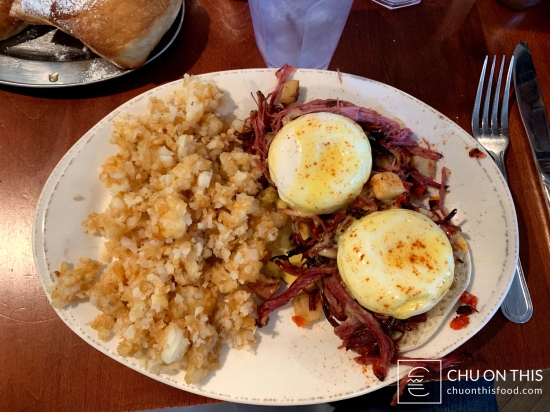 And finally, here are my rankings for Syrup:

There’s an excellent variety of food options to choose from, ranging from pancakes to waffles to benedicts to omelettes. Whether you’re in the mood for something sweet, something savory, or even both, you’re more than likely to be able to find it.

While the inside décor does give off that homey feel, I think the layout of the standalone tables in the dining area made it feel a little bit more crowded when you’re seated.

Our waiter, Dakota, was pretty friendly to us and helped to recommend some food options once we got seated. The kitchen staff was really great about turning out the food quickly, and Dakota did stop by periodically to check in on how things were going.

I don’t think that the prices you’d find are outside the normal realm for brunch in a city neighborhood. The larger portions of food also helped to boost the value for what you pay.