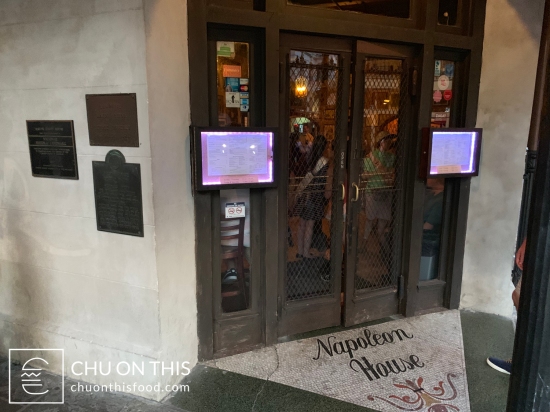 After taking a pretty riveting haunted tour through the French Quarter of New Orleans, filled with some interesting and graphic stories (to say the least), everyone was still able to muster enough of an appetite for dinner. We headed over to a spot called the Napoleon House, a historic location that has been around since 1812. Do the math, and that’s over two centuries’ worth of stories within those walls.

Step through the two front doors, and you could definitely tell the place has been around for quite some time. Old pictures and paintings adorned the walls, along with paint and plaster that had since faded away. I could only best describe it as an “Edgar Allen Poe” type of vibe that I was getting from the place.

It didn’t look like there were any tables inside that could accommodate a crowd as large as ours, so the waitstaff led us to an outdoor courtyard, where they put a bunch of smaller tables together for us. It was still relatively warm, even for nighttime, so sitting outside actually felt pretty comfortable.

Po’ boys and other specialty sandwiches were featured very prominently on the menu, along with other New Orleans staples like jambalaya and gumbo. Up to that point in the trip, in the three restaurants we had been to, I had ordered three different types of sandwiches. I needed to keep the streak alive, so another sandwich it was for me.

Of the specialty sandwiches they offered, the two that caught my attention were the Grilled Chicken & Brie and the Curried Chicken Salad. I initially ordered the latter of the two, but as the waiter was making his way around the table collecting orders, I had a change of heart and went with the Grilled Chicken instead. But to replace the brie (no cow’s milk for me), I asked for their herbed feta & goat cheese spread instead. I also tacked on a side order of their jambalaya, just to give it a try.

One of the things that surprised me the most was just how inexpensive most of the items on their menu were. This was especially the case since we were pretty smack dab in the French Quarter, where I’d expect some of those “city pricing” food premiums to come into play. What probably would have been a minimum of $12 or $13 for the sandwich I ordered at another restaurant was only $8.75 at Napoleon House. 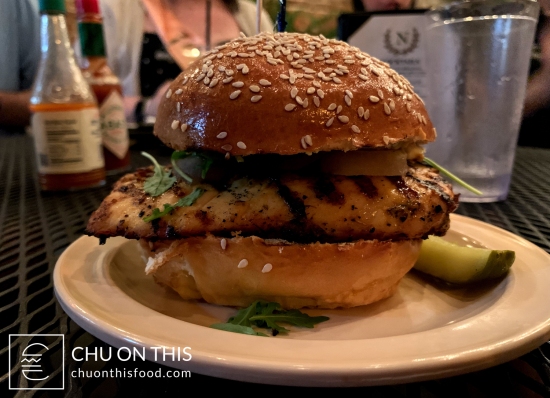 I went for the jambalaya first and honestly, I wasn’t very impressed. While it did have a moderate amount of flavor from the spices and vegetables, overall it was really dried out and didn’t seem to improve with subsequent bites. I’m just glad that I got it for a side (even though it was $3.50 for that small portion), since if I had gotten an entrée size, that would have made for a rougher experience.

The sandwich, on the other hand, was on the polar opposite of the spectrum from the jambalaya. The chicken breast had a great char on the outside from the grill, was seasoned well, and still very moist on the inside. It was a sizeable portion of chicken for the sandwich, and the savory flavors paired very well with the slight sweetness of the poached apples. Roasted red pepper aioli combined with the herbed feta & goat cheese spread provided a smooth richness and slightly spicy depth of flavor, while the fresh arugula leaves had that burst of peppery flavor. The sesame bun was also just the right size to hold everything together.

This is another one of those restaurants that isn’t going to jump out at you from the street, and the vibe inside is definitely more in-tune with the historic New Orleans side of things. I arrived without many expectations, but came away pretty impressed with their sandwich selection as well as quality of the flavor combinations. Price-wise, it seemed hard to beat for most of the items on the menu, especially with the restaurant’s location right in the city. If you’re a sandwich person (like myself), consider a stop into this place to check it out if you’re hanging out in the French Quarter. 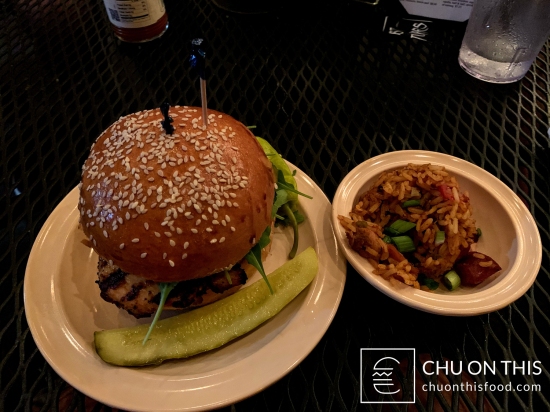 And finally, here are my rankings for Napoleon House:

My grilled chicken sandwich had a really nice flavor combination to it, with those savory and peppery flavors melding unexpectedly well with the slight sweetness of the poached apples. The disappointment came in the form of the jambalaya, with the dry texture being something that was really difficult to look past.

Maybe that old-school vibe isn’t really my thing, especially when it comes to the interior. But the restaurant prides itself on its history, and it definitely shows. I did also appreciate the open-air courtyard in the middle of the building where we were dining, as it didn’t feel as packed in as some of the tables inside looked.

It’s sometimes tough to gauge a member of the waitstaff when servicing a large group like ours. For the most part, his visits back to our table to see how we were doing were pretty timely. But when he was taking our orders, I got the impression of a bit of a cold demeanor.

The entrée pricing alone would have catapulted this section directly to top marks. It’s the side order of jambalaya, however, that provided just a bit of a sour note to have the rating skirt just underneath it.