The day I was due to fly back to Florida from Salt Lake City, my friend Tina threw out some ideas of places to get an early lunch before heading over to the airport. The one place that did seem to stick: a sandwich spot called Even Stevens that Tina had been to up in Ogden. After some sleuthing on Google Maps, we were able to find out they had a location down in Salt Lake City as well, which made it much more convenient relative to the airport.

From the moment we walked in, I got this “college town” vibe from the place. I don’t know how else to really describe it, aside from the fact that maybe it reminded me of the some of the restaurants back at Purdue, where I had gone to school. But perhaps my impression wasn’t too far off, since the University of Utah’s main campus wasn’t too far away. The inside had a nice variety of tables and booth seating, with colorful artwork and paint schemes up on the walls. The open space seemed to make it a good place to either grab a bite to eat or find a spot to get some studying done.

I was initially thinking about going with one of their breakfast burritos, but once I found out they were already serving their full sandwich menu (even at 10 a.m. when we got there), that changed the game plan a little bit. After a quick repeat look through the sandwiches, the two that stuck out were the Sprang Chicken (roasted chicken, provolone, bacon, avocado, tomatoes, cucumbers, greens, and honey mustard on wheat ciabatta) or the Chicken Pesto (chicken, mozzarella, pesto mayo, greens, and tomatoes on French bread).

But Tina threw in a third option for me, the Mihami Vice, which ended up winning out. It was the Even Stevens take on a Cuban sandwich: roasted pork, ham, creamy mustard, Swiss (which I left off), and pickle spears on a French baguette. I don’t know what it was, but something just sounded really good about biting into a Cubano that early in the morning. (Not to mention that I’d developed an affinity for Cuban sandwiches, and I hadn’t gotten a fix in quite a while.) 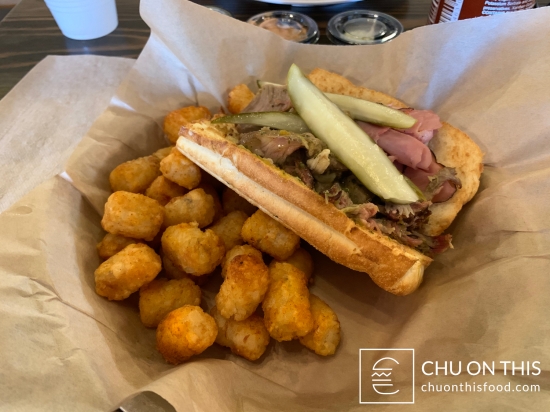 Because of the relatively light crowd that early in the morning, our food came out of the kitchen pretty quickly. The Mihami Vice was initially served open-faced, with the ham, roasted pork, and pickle spears on prominent display. I closed the sandwich up and gave it a quick little press before attempting to get a bite that captured all the ingredients.

The rich, savory flavors from the ham and roasted pork hit first, followed by the tangy elements of the pickles and mustard. But don’t underestimate what good quality bread can do for the sandwich too. The baguette that the Mihami Vice was served on had a crispy exterior, but was soft on the inside. So when you took a bite of the sandwich, you were able to get that initial crunch, and after that point, the rest of the ingredients and flavors all mixed well together. The side of tater tots was also pretty good as well, packing a slight bit of a kick from the seasoning.

Even Stevens seems like a pretty chill place to stop by and pick up a quality sandwich. There are 14 different options to choose from, all made with fresh ingredients. I could also appreciate the fact that between all of the choices, the flavor profiles for each of them were pretty diverse, so you could pick something you were in the mood for. If you’re a sandwich person and looking for something quick, easy, and tasty, Even Stevens can help to hook it up.

Let’s now take a look at the Even Stevens Sandwiches Dish Spotlight. Asterisks (*) below mark my recommended dishes.

And finally, here are my rankings for Even Stevens Sandwiches:

14 sandwich options help cover a relatively diverse flavor profile spectrum. All the ingredients in my Mihami Vice tasted real fresh, from the bread to the meats to the toppings. The tots were also cooked up nice and crispy, with a light seasoning of paprika to give it a bit of spice.

The inside of the restaurant was a nice open space, with a mix of tables and booths for seating. The colorful artwork and paint scheme up on the walls definitely helped provide a slight bit of a vibrance to the space. That semi-industrial feel was also present too, with elements like exposed ceiling supports and a concrete floor surface.

You walk up to the counter to initially place your order and take a number placard out to the table. Once your order is ready, someone from the kitchen will come by to drop off your food. Given the fact that it was a light crowd, the kitchen was able to power through our orders pretty quick.

For $12.25, I thought that the portion size of the sandwich was pretty decent; the sandwich itself got loaded up with a nice mix of ham and roasted pork. The $2 surcharge (included in the $12.25 mentioned), however, to switch out from chips to their seasoned tots did seem a bit much though. There are a few different sides that you can swap out to, but perhaps having a $1 tier and $2 tier would be better, saving the more “gourmet” upgrades for that $2 tier.