It all started with a conversation at work about how the local supermarket chain down here in Florida, Publix, sells condiment bottles of Chick-Fil-A sauce. One train of thought led to another, and the idea for what I like to call “loaded fries, Chick-Fil-A style” was born.

I drew my inspiration for this dish from the various forms of poutine served out of one of the booths at Epcot in Walt Disney World. The different ingredients going on top would need to blend together well, from both a flavor and a texture standpoint. I didn’t want any one particular ingredient overpowering everything else, and for the most part, I think the dish pulls it off.

With nine different ingredients going on top of the fries, this dish really packs in a variety of different flavors. Sweet, savory, spicy, and tangy are all possibilities with each bite you take. 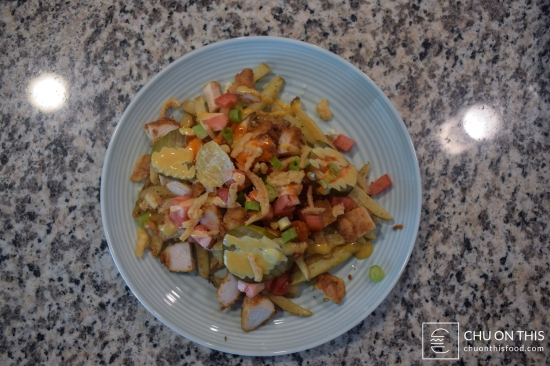 It took me two iterations to get this recipe where I wanted it to be. I only added in the Frank’s Red Hot buffalo sauce the second time, but it was exactly what the dish needed. The spicy element and vinegar from the sauce helped to counter the strong sweetness that came from the Chick-Fil-A sauce. The flavor distribution I think is pretty good, and I like how each bite you can get a different combination depending on which ingredients you were able to pick up.