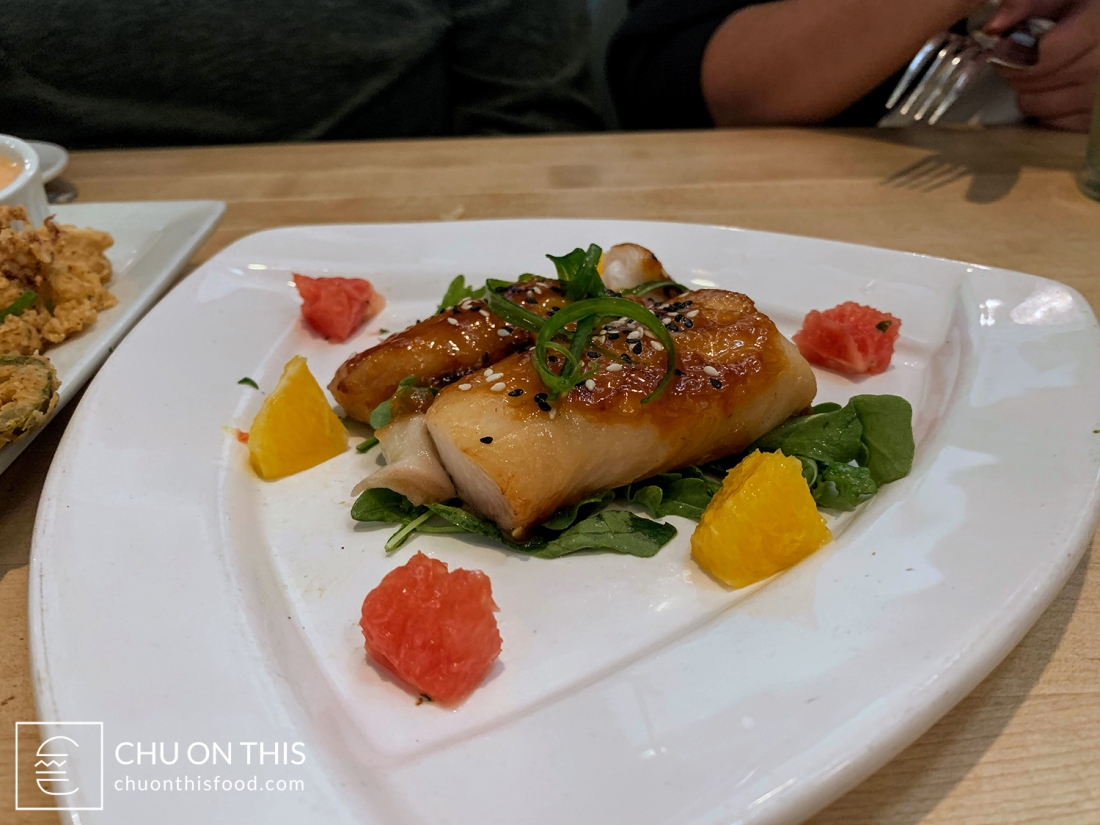 Each time I go down to the Camarillo area to visit my brother Kevin and his fiancée Alina, it’s another opportunity to try a restaurant down in their area. They have a few spots they frequent that they enjoy taking me to, and one of those places is Lure Fish House.

There are multiple locations for Lure Fish House in the southern California area, and I’d say the overall vibe of the restaurant most closely reminds me of Bonefish Grill. They specialize in seafood served in a slight bit of a more upscale setting. The only difference between the two is that I felt like the atmosphere in Bonefish sometimes could be more intimate, where Lure instead still feels more relaxed and laid-back.

The menu offers a variety of different fish fillets and shellfish, which could also even come in the form of tacos, sandwiches, pastas, or salads. There were plenty of appetizers that sounded pretty good, but we decided to go with a trio selection of the Crab Cakes (Alina’s favorite), Crispy Calamari, and Miso Glazed Black Cod. For my entrée order, I went with the Sesame Seared Ahi Tuna.

For both of the visits that I’ve been to Lure, it has been during the daytime, so the large windows on the exterior help to bring in a lot of natural light into the dining area. Because there is a lot of light-colored paint scheme on the walls, that helps to reflect that light around and make it feel even brighter as well.

There are also a lot of wood panel elements that you see incorporated into the restaurant’s décor, definitely calling back to a harborside dock or a boardwalk by the sea. This particular location also had a bar in another part of the restaurant and even a display area (similar to what you’d see at a seafood market) that showed some of the fresh fish that the restaurant was offering that day.

It’s often been relatively packed when we visit, and this time was no exception. (Our wait time to get a table was about 25 – 30 minutes.) But despite the crowds, it seems like the kitchen staff is able to keep up well, because our appetizers seemed to come out relatively quickly (in addition to their complimentary sourdough bread, which is also pretty great, too).

I think I inherited an enjoyment of calamari from my dad, because both times that I’ve visited Lure, the calamari has always been a part of the appetizer order. I like how the breading on the calamari was light, yet still crispy. They also add some fried chili pepper slices into the mix as well, which help to give a nice kick to some bites if you eat both pieces at once. The crab cakes were also done well, with a nice ratio between crabmeat and breading filler. It was an overall savory flavor from the crab cake, and a splash of lime juice on top gave it that slight burst of citrus flavor as a contrast.

The miso glazed black cod appetizer, however, was new to all three of us. There was really prominent savory, sweet, and umami flavors from the glaze on the outside of the fish, which might have been made with a combination of miso, soy sauce, and maple syrup to give it all of those flavors. The black cod itself was flaky, but each piece almost melted in your mouth as you started eating it. In a way, because there wasn’t a significant portion of fish on the plate, it made you savor each bite even more.

After we had finished two of our three appetizers, our entrées started to roll out to the table. Upon first glance, it looked like the ahi tuna steak was sliced once it was finished cooking prior to getting plated. There were some bites from the center of the ahi tuna that almost had a slightly mushy texture to it, which I thought was a bit odd. (I had been expecting the tuna steak to be more firm.) From that experience, the ahi tuna would not be an entrée that I would order again.

From an overall standpoint, Lure does have a great variety of seafood options to choose from, catering to whatever you might be in the mood for. In this particular visit, the appetizers ended up outshining the entrée. But during my first visit a while back, I had tried their Sand Dabs entrée (at the recommendation of Alina) and do remember that being really good (but pretty heavy-handed on the oil). Although there is a bit of inconsistency with the experiences, I would still return here again to give the other seafood options a try.

** Crab Cakes **
Crab cakes served on top of a cilantro corn salad and a side of remoulade.

** Crispy Calamari **
Crispy calamari along with red and green jalapeño pieces, served with a chipotle aioli and roasted tomato sauce.

And finally, here are my rankings for Lure Fish House:

There is definitely a good variety on the menu of things to choose from to fulfill your seafood craving. The appetizers were all pretty much on point, but it was just the ahi tuna that felt lacking a bit, from my perspective. But I also contrast things with the sand dabs entrée from my first visit as well, and how much I enjoyed that.

I always enjoy a bit of a modern aesthetic to the dining area, and I thought that Lure did a great job bringing in that dockside feel, with the wood and stone elements. The natural lighting also helped to make the entire area pretty vibrant as well.

Our waitress, Amber, was friendly and hospitable during the course of our meal. She did come back a few times to check in on how the meal was going. Even though the restaurant was pretty full, I thought the kitchen did pretty well to ensure our food came out at a reasonable pace.

Seafood is always going to lean on the pricier side, but I thought that the black cod and crab cakes was a bit on the high side, given the portions you were served. For comparison, the black cod ($17) and crab cakes ($18) were almost as much as my ahi tuna entrée ($21).