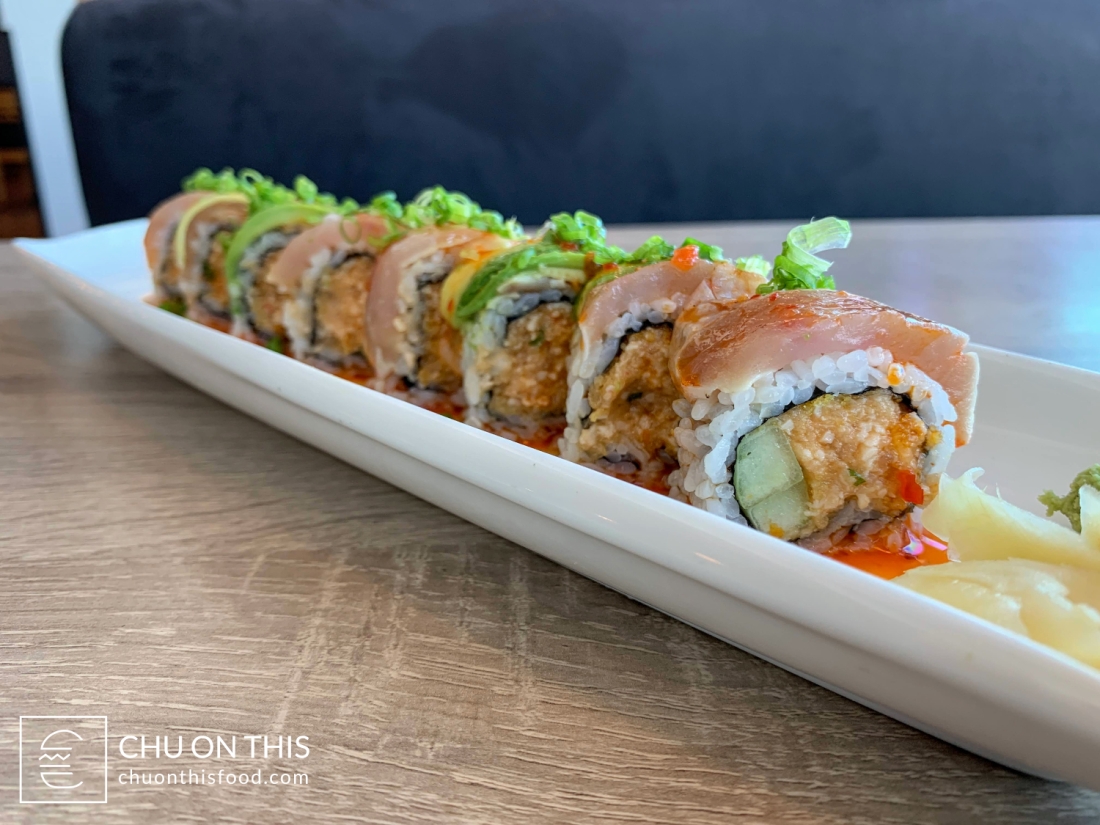 The Marine Corps Air Station Miramar Air Show is back after a three-year hiatus, and I’ve had this air show bookmarked for quite some time to check out. The day before attending the show, I decided to drive down to the area and check out La Jolla, since I had heard a lot about it.

It so happened that I had Blue Ocean / Harumama tagged on my Google Maps from one of my previous times browsing around the area. I hadn’t had sushi in quite some time, so this was going to be the perfect way to satisfy that craving before exploring the coastline walking around town.

The dining room itself overlooks the ocean, and because I got there when it was a bit slow during lunch service, I was fortunate enough to get one of the booths with a direct ocean view. I really enjoyed how much natural lighting that was getting brought in by the large pane windows. The rest of the dining area does have a bit of a modern chic feel to it, primarily using wood elements for the furniture and décor. There was also a nautical undertone as well, with sea blue and white colors along with warm temperature lighting.

I overheard one of the waiters mentioning to a table nearby that the restaurant’s specialties were their sushi and the ramen. If you look at their menu, there’s certainly a wide variety to choose from in both of those regards. Between their specialty rolls and tempura rolls, I think there were probably at least six different ones that sounded good to me. Maybe if there was a larger group, we could order more to share and try different ones. But I had to pick only two of them (which was pretty difficult to narrow down), and the Albacore Delight and Padres Rolls were the winners. I also tacked on an order of their Panda character steamed buns.

There were only four other tables seated when I was there, so the number of orders that the kitchen and sushi chefs had to work was pretty light. That definitely explained how the steamed buns came to my table within a couple of minutes, with the sushi rolls not trailing far behind after that. My waiter, Adam, also did a good job to stop by and check in periodically to see how things were.

First up were the Panda steamed buns, which came in an order of two and I thought was a pretty fun presentation. They certainly did look like little pandas in the steamer basket. The inside was filled with shredded spicy chicken, broccoli, and scallions, but I didn’t really get any of the broccoli. The flavor of the filling was okay, but for the price of $8.95, I thought that each bun would be bigger. They were approximately two inches in diameter each, so I’m not really sure the value is there. Sure, the novelty of it was fun, but I don’t think I was eating $4.50 worth of a steamed bun.

The sushi, on the other hand, was really good. All of the ingredients tasted super fresh, and I liked how you were able to discern the various individual components that made up each roll. In addition, the roll selection turned out to be really nice where there was a good variety of flavors to experience.

I tried the Albacore Delight Roll first, which contains a mixture of albacore, krab, and miso, along with cucumber and tempura crunch on the inside, topped with additional albacore, avocado, scallions, chili oil, and ponzu. The richness from the albacore definitely came through, and the cucumber added a nice crunchy texture contrast to the other components in the roll. There was definitely a simmering heat that came with the chili oil as you ate more pieces as well. But as a fan of albacore, I think that the roll did it justice.

The Padres Roll was definitely an interesting flavor combination in its own right as well, with tempura shrimp, krab, and cucumber on the inside, topped with avocado, spicy mayo, eel sauce, and chef blend sauce. The pieces were then arranged in a circle, with a pile of chopped soft shell crab dropped in the middle and a garnish of microgreens and edible flowers on top. The ratio of the krab to the tempura shrimp leaned more towards the krab, so that’s the predominant flavor that I got. The spicy mayo added a nice kick to each bite, with the avocado giving a smoothness to complement things as well. But the soft shell crab tempura was a nice addition too, providing an extra bit of a crunch (I primarily ate it on its own, since it was a big bite if I tried stacking it onto a piece). Two different rolls, two very different flavor combinations.

The afternoon in the La Jolla area started off on the right foot with this sushi stop to Blue Ocean. I couldn’t have asked for a better lunchtime dining view than overlooking the Pacific Ocean, and the rolls more than lived up to their descriptions. Fresh ingredients and tasty flavors definitely helped the sushi stand out more to me than the steamed buns did. Even if parking in this area can be tough, I can say that it would be worth it for stopping in and giving this restaurant a try.

And finally, here are my rankings for Blue Ocean / Harumama:

There are plenty of sushi rolls to choose from on the menu, with the quality and freshness of the ingredients really shining through. Even if the Panda character buns were mediocre, a strong showing by the sushi rolls certainly helped.

The oceanfront views, coupled with the modern décor elements and how the nautical color theme tied everything together, it really checked off all the boxes for me.

I thought that Adam was very courteous and nice to come back by and check in on how things were with the meal. The sushi chefs and kitchen staff also did a really good job to bust out the food in no time at all.

The sushi roll prices were very reasonable to me, especially given the prime location of the restaurant. With the quality of the ingredients within the rolls, they are prices I’d be happy to pay for again. The only thing that took this down a bit, however, was for how expensive I thought the character steamed buns were.