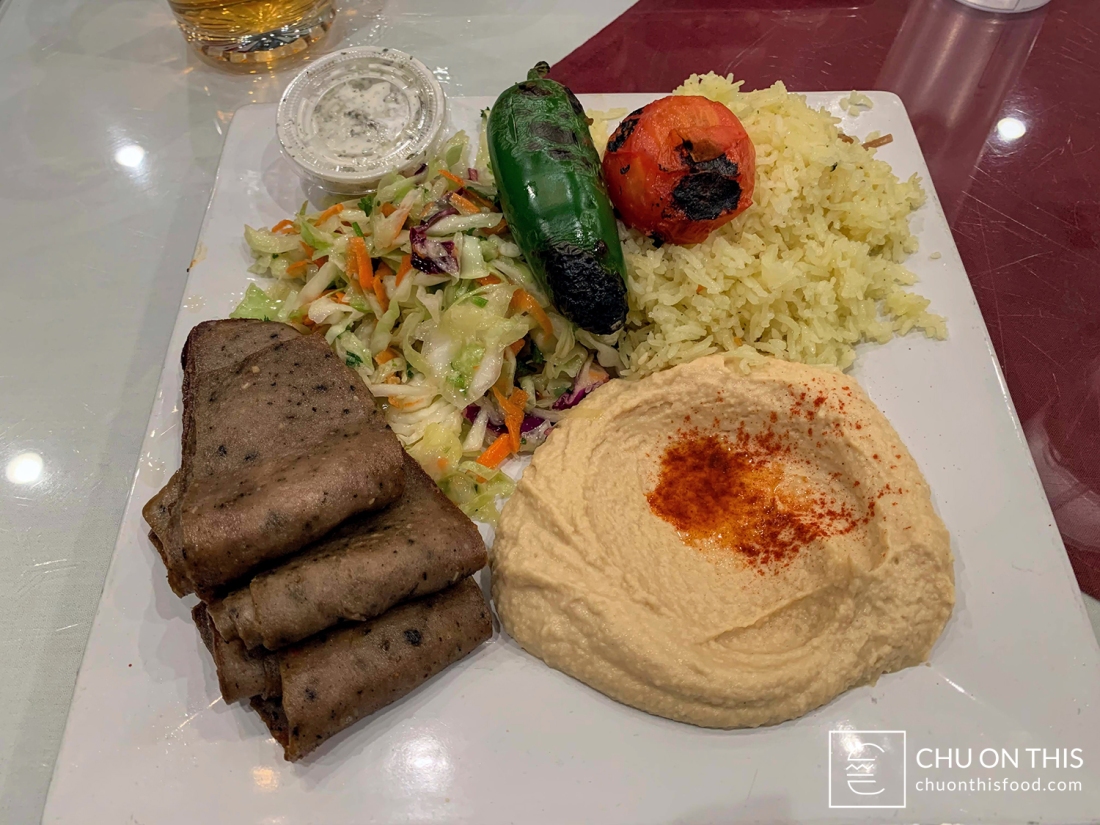 Last month, my friend Jose took a business trip out to the Palmdale area, and we decided to try and get some dinner one of the nights he was out here. After passing up on another restaurant that was on Lancaster Boulevard due to the wait time, we decided to walk down to Olives Mediterranean Café to give it a try.

The restaurant is located at one end of the main stretch of the shops and restaurants on Lancaster Boulevard, situated away from the hustle and bustle. There was still a pretty decent Thursday night crowd in the restaurant that night, which could seat approximately 50 – 60 people inside. I had always heard good things about the restaurant from multiple people that lived in the area, so I was looking forward to seeing how it was and adding another cuisine type that I could get in the area.

For appetizers, you’ve got several options of dips, like hummus, babaganoush, and tzatziki, along with a few other options of pita and cheese plates. As for main entrées, there are plentiful of traditional Mediterranean grilled meat options, like kabobs, shawarma, and souvlaki, made with beef, lamb, pork, and chicken. There are also Mediterranean-inspired pizzas, salads, pita sandwiches, and also vegetarian options to choose from as well.

As with trying any new restaurants, Jose and I both wanted to get a good sampling of some of their different dishes. We ordered a babaganoush appetizer to split, and then I got a lamb gyro plate with an added side order of falafel. Off the bat, it definitely sounded like a lot of food, and I was skeptical if I would be able to cram it all down. But it ended up being not an issue at the end of the day.

The thing that occurred to me while we were eating was the fact that the dining room itself was relatively quiet. Even though it was probably around half-full, everyone seemed to be talking in lowered voices. Not sure if it’s like that typically on most nights or just so happened to be that way, but it was just an interesting observation overall. I drew a bit of a parallel of the fact that it was away from some of the other restaurants on the Boulevard that seemed to be bustling on a Thursday night and this place seemed like it was more low key.

Interestingly enough, our entrées actually arrived out before our babaganoush appetizer did. My lamb gyro plate also had a salad tossed in a vinaigrette, rice pilaf, hummus, grilled vegetables (tomato and jalapeño), in addition to the gyro meat itself. The side order of falafel came with three portions, served with a tahini dipping sauce. Our babaganoush arrived to complete our order, with a dish of pita wedges, a little after we started digging into our entrées.

The lamb meat was definitely on point, with the aromatic flavors of the spices standing on its own and didn’t require any additional sauce for me to eat it. I thought the rice pilaf was also pretty tasty as well, and complemented the meat and vegetables really well. The hummus itself also had some really good flavor, and provided a creamy texture to some of the bites that I had with the lamb meat. Funny enough, I didn’t initially register that the grilled pepper in front of me was a jalapeño, and ended up taking a bite of about one inch of the pepper. Needless to say, my mouth definitely felt the effects of that decision and it took a little bit for my eyes to stop watering so I could continue eating.

The babaganoush, which is made with eggplant, ended up being a lot smoother and creamy of a texture than the hummus was (which is made with chickpeas). Both tasted really good when paired with the pita, but I found that the babaganoush had more of a cooling effect than the hummus did. The falafel, on the other hand, seemed more on the average side. It was definitely really dry, so the tahini dipping sauce helped out. I even ended up adding some babaganoush to help give each falafel bite some more moisture.

It did end up being a lot of food overall, but I was surprised that I didn’t feel too heavy or weighed down like sometimes at other places when I’m super stuffed. I think that’s probably because all of the food (with the exception of the falafel) was fresh or roasted, without a lot of grease. That’s always one of the things I do appreciate about Mediterranean food, where you can eat more volume and not feel as bad for it later.

I’m glad that Jose and I decided to give Olives a try, as the food and flavors definitely tasted great. Looking through the menu, I’m thinking that one of those Mediterranean pizzas are on my list to check out for next time, since that definitely sounds intriguing as well. I’d recommend stopping by Olives if you are looking for some aromatic flavors and good quality food that will definitely leave you satisfied.

And finally, here are my rankings for Olives Mediterranean Café:

I thought that there is a good variety of different Mediterranean dishes available to try on the menu, certainly with a focus on the grilled / roasted / fresh dishes. The portions were also pretty generous, and all of the food tasted really fresh as well.

The dining area had a more contemporary décor feel to it, with the tables being spaced out enough that the various parties did not feel like they were crowded in. Even if it was relatively quiet in the dining area, it didn’t detract from the overall experience.

It ended up taking a little bit of time before our food ended up coming out of the kitchen, with our appetizer coming out after our main entrées had arrived. Our waitress, however, was pretty nice and welcoming. She also did check up on us during the meal to make sure we had what we needed.

The pricing for the dinner entrées and the pita sandwiches was very reasonable, with a good amount of food coming with each order. With the quality of the ingredients, I thought the price was definitely worth what you paid.