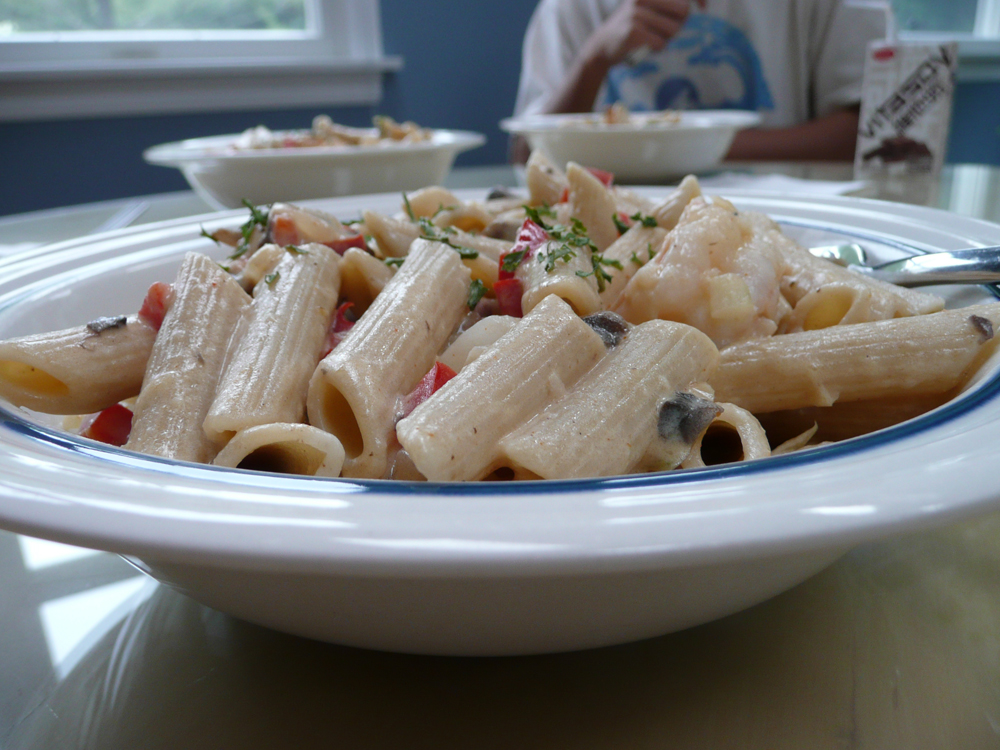 This weekend, I looked for something to make that we already had a lot of ingredients for. It was perfect that I came across this recipe for a shrimp alfredo sauce served over penne pasta, as almost all of the ingredients we already had in the fridge or the pantry and it looked really straightforward to make. This recipe makes six hearty bowls of pasta.

Process
The first thing that you need to start off with is to prep all of the vegetables you have. Dice up the onions, peppers and mushrooms, and mince up the garlic. After you’re finished with that, prepare the shrimp by peeling and de-veining them. Put them on a separate plate and sprinkle salt, pepper, and parsley to both sides of them; set aside to cook later.

Now that you have all of the preparation work done, bring a pot of lightly salted water to boiling and pour the penne pasta in. Cook according to the box’s instructions (for us, it was about 10 minutes). While that is going, in a large frying pan, heat it up on the stove and pour some oil in. Cook the peppers, onions, mushrooms, and shrimp all the way through on about medium-high heat and then set them all into a large saucepan. When you are done cooking with the pan, swap it out with the saucepan and begin to heat that up on medium-high heat. Add in the alfredo sauce and half-and-half, stir for a little bit, and then add in the grated Parmesan. Add in the cayenne pepper, along with the salt and pepper, while tasting the sauce as you’re adding to ensure the flavors are to your liking. Once that’s done, turn off the heat and keep the pan on the stove.

The best way that we found to prepare it for serving was to put the pasta in a separate mixing bowl and then add in the alfredo sauce to it, tossing it, and then transferring that to the dinner bowl. Serve with some dried parsley sprinkled on the top for garnish. We found the overall flavor of the dish to be pretty good; however, the 1/4 tsp of cayenne pepper is fairly mild for this amount of sauce. If you want to kick up the heat a notch, you can always try 1/2 tsp. The dish itself wasn’t as heavy as other alfredo dishes I have had before, which was a pleasant surprise and something that I liked about it. This is something that’s great to throw together for a hearty meal and is sure to satisfy.