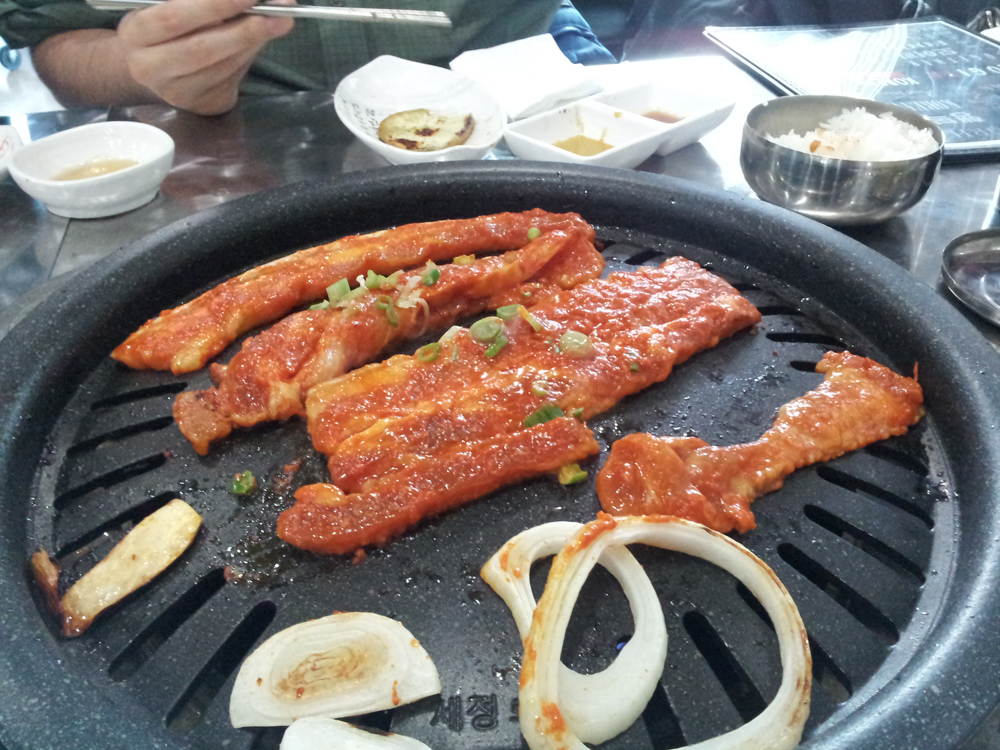 A plateful of dak galbi, or spicy marinated chicken.

Thin slices of brisket over the grill, along with some vegetables.

Miso-marinated pork belly strips, the second of three different options we had of pork belly dishes.

A fried rice dish that was made mixing bean sprouts, eggs, mushrooms, and a red chili sauce.

One of the local residents in Annandale recently pointed out to me about a new Korean BBQ restaurant opening up in the area. I’ve heard plenty about Korean BBQ with my friends at work frequenting Honey Pig (another Korean BBQ restaurant in Annandale), and I wanted to give this place a shot. There’s just something about having the grill top embedded in your table and seeing the food cook in front of you that’s really cool. It also probably explains why I love eating hibachi so much, too.

Kogiya is located right in the heart of where a lot of the Annandale businesses are clustered. It’s not a very hard location to get to, but the parking lot can get full pretty quickly if it’s busy. I headed over to Kogiya with my friends Mike and Kari, who had gone to Honey Pig multiple times before, but were curious to see how this new restaurant compared to its competitor down the road.

The interior of the restaurant is pretty spacious, with a number of the grill-tables spaced out enough that you didn’t feel like you were intruding on the space of the table next to you. The menu looked very extensive, offering a wide variety of meats  for grilling as well as soups and  rice / noodle dishes. However, the three of us immediately dialed in on their All You Can Eat special, which featured a wide spread of choices from three different types of pork belly to brisket to spicy marinated chicken.

The waitstaff at the restaurant were very helpful, bringing out food very efficiently, helping to cook it for you, and also helping to refill your drinks. There were about three or four different people that cycled between the tables, making sure that all the people dining at the restaurant had what they needed. The first group of things to make it onto your table are all the side dishes (the ones I knew were kimchi, picked vegetables, bean sprouts, and a mashed potato salad; there were several other plates I wasn’t too sure about). The next things were a Korean soy sauce, honey mustard sauce, and salty Sesame oil, followed up with bowls of rice, a steamed egg, and a bowl of tofu soup. It was a ton of stuff to start off, and we hadn’t even gotten to the main food yet!

We got our first plate of meats, which was the chadol bakgi, or brisket slices. The slices came out all curled up, but once they were put onto the grill, they unraveled into flat pieces, which was really neat to see. The brisket itself was very tasty, and even more so when dipped into the Korean soy sauce or the salty sesame oil and then eaten with some rice. For our second round of meats, we opted to try the jang sam kyup sal, or spicy pork belly. The strips came out on the plate soaked in the red chili sauce marinade, topped off with some scallions. The immediate sizzle when throwing them into the grill and the smell was enough to make you even hungrier. The pork belly had a great sweet and spicy flavor from the marinade, and the cut had a great texture contrast between the meat and the fat.

Third round we moved on to the dak galbi, or spicy marinated chicken. The dish usually combines scallions, onions, mushrooms, and pieces of chicken, marinating them all in a spicy red chili sauce. Cooking them all on the grill locked in a lot of the flavor, and you could certainly taste that same sweet and spicy flavor when it was finished cooking. Our last plate of meats was the miso sam kyup sal, or miso-marinaded pork belly. It had more of a salty flavor to it and the miso taste offset that a little bit.

Our last dish for the night was a fried rice dish, where they changed out our grill top for a wok that was already filled with some bean sprouts, mushrooms, tofu, onions, and red chili sauce. After cracking an egg into the wok and mixing everything around a bit, the waitress threw a bowl of rice in there to finish everything off. The fried rice had great flavor with the mix of all the ingredients and the chili sauce, definitely something that I could eat a ton of bowls of.

Being that this was my first experience with Korean BBQ, I have to say that it was a very positive one. It was cool to see all of your food cook in front of you and the sheer amount of food that we got left me so stuffed by the end of the meal. I would definitely go back again, and next time I’ll save more room for more food!

Here are my rankings for Kogiya Korean BBQ:

Food: 4.5 / 5
All of the meat dishes we tried had great flavor, and the variety that Kogiya offers will give you something different to try each time you go.

Atmosphere: 4.5 / 5
The dining area is well-lit and you’ll get a constant aroma of things cooking on the grills when you first walk in. Seeing all different kinds of meats and vegetables cooking on the grills at the tables is really neat and adds to the restaurant’s ambiance. It’s also quiet enough when people are having casual conversations at the table that it doesn’t seem all too noisy.

Service: 5 / 5
The waitstaff were all very friendly and always tried their best to make sure that we had everything we needed. If we asked for some additional food or drinks, they would bring it over very promptly.

Price: 5 / 5
For the price of $19, it was an unbelievable amount of food that we got. The quality and quantity of food was certainly well worth the price. When we went, however, that price was the Grand Opening special, so I’m not sure if that price will remain the same in the future.