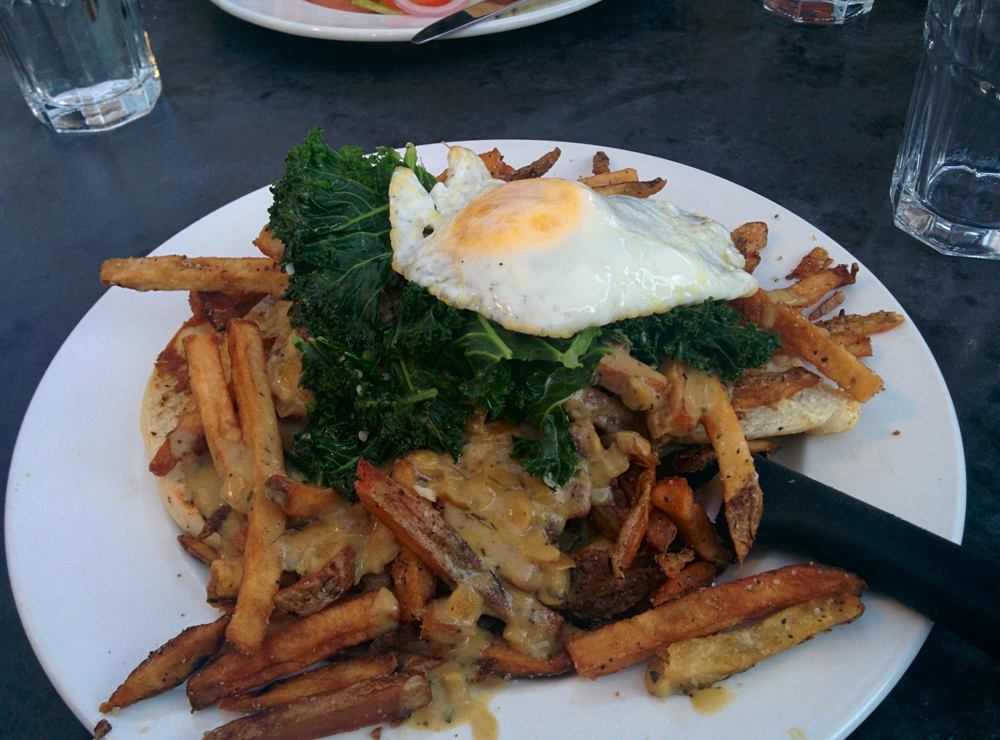 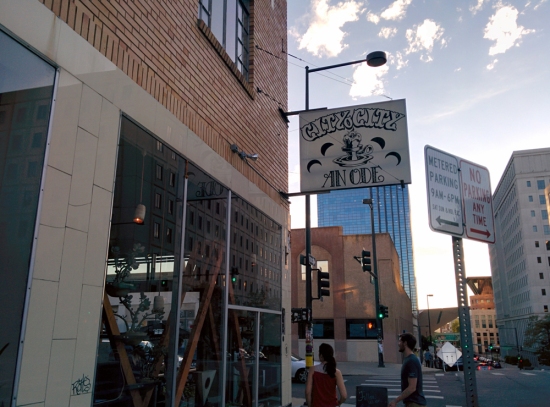 I’ve been a pretty big meat eater all my life. Bacon, chicken wings, hot dogs, you name it. It’s because of this, however, that I haven’t had much experience eating at vegan restaurants; going to City O’ City was a complete 180° from what I’m normally used to. Both my friends Andrew and Angie spoke highly of the place, and I was up for branching out to try something new. So, on my first night visiting them in Denver, we walked over to the restaurant to grab a late dinner.

The restaurant has both an outdoor and indoor dining area, along with a bar in the back of the restaurant. It was a fairly cool summer evening, so we opted to sit outside. We had an opportunity to glance over the menu before our waitress arrived to get our food and drink orders.

One thing that I was pretty impressed with was the wide selection of dishes, ranging from salads to sandwiches to pizzas. It made it that much harder to choose, since there were plenty of dishes that sounded real good from the descriptions. Andrew mentioned that he had tried the Fork and Knife Sandwich before and it was pretty good. He also said that it would be a heaping plate of food, which I thought was perfect since I was starving.

Although we were sitting outside, I did walk through the inside dining room as well. It’s a very interesting open concept, with long tables that could sit a full party of 12, or have multiple smaller groups sit there as well. The design of the lights added a relaxed feel to the dining room; the back area by the bar had the lighting dimmed down a little bit. As one person described it, the restaurant gave off a bit of a hipster vibe.

When my food arrived, I could see what Andrew had tried to warn me about. The plate was covered with fries, gravy, sautéed kale, and a fried egg; I couldn’t even see the “meatloaf” or the bun of the sandwich! Arming myself with the steak knife they gave me, I began my journey into the depths of that mound of food.

The fries were done really well: nice and crispy on the outside, soft on the inside, and seasoned just right with salt and pepper. The kale was also really tasty, sautéed with garlic and seasoned with salt. It was the gravy, however, that gave the dish a rich flavor and acted to tie everything in together. I will say, though, that the gravy itself had a fair amount of salt, which meant that some bites of the food I felt the saltiness was a little overwhelming. (Maybe a way to get around this is to ask for the gravy on the side?) It’s the gravy, however, that when added to the meatloaf really enriched its flavor. Take away the gravy and the meatloaf ended up being a little dry and underseasoned for my taste.

It certainly was a lot of food, and I ended up making it through all the fries, the kale, and the egg, with most of the bun knocked out too. However, the remaining half of the meatloaf I couldn’t get through with its dryness, and I had already used up all the gravy eating the fries. Aside from that, I thought the dish tasted good overall and certainly delivered with its portion size.

I was pleasantly surprised by this vegan restaurant outing, and it certainly broadened my horizons. With the variety of other dishes offered on the menu, I would be interested in returning to give something else a try. 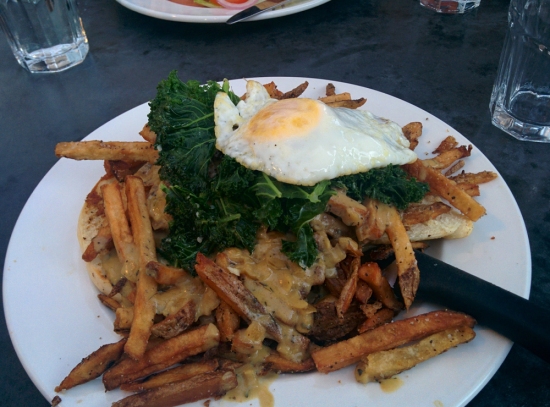 ** Fork and Knife Sandwich **
Meatless loaf served on a pretzel bun, topped with fries, gravy, and sautéed kale. Fried egg can be added by request.

And finally, here are my rankings for City O’ City:

Wide selection of food to leave plenty of options for returning diners. Overall, I was pretty happy with how my food turned out.

Nice use of lighting and decorations in the dining room to provide a loungey feel to the place.

Our waitress was very affable and came back to check on us a few times during the meal. One minor detail I noticed: we had to specifically ask to get a refill on our water.

It’s slightly surprising to see the expensive pricing for the dishes, considering meats are often times your most expensive ingredient for a dish. I think the value might also be better going for dinner instead of lunch.