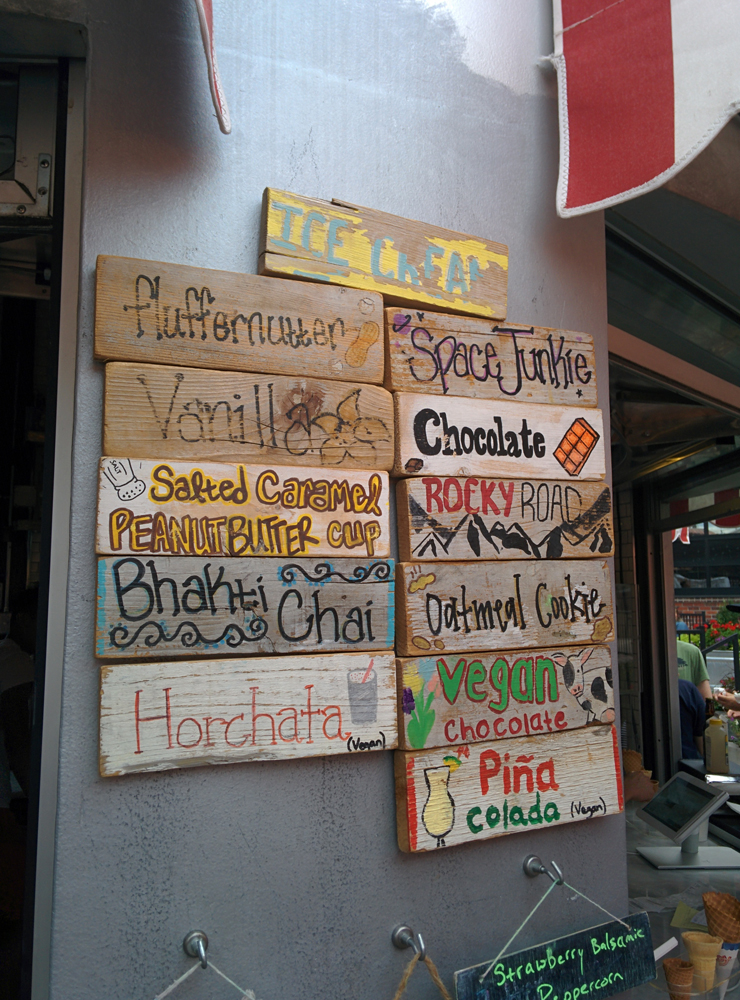 In the weeks that led up to my going out to Denver, I had been talking with my friend Andrew about what we should check out in the area. One of the things that he mentioned repeatedly was that “we had to check out Little Man.” I wasn’t really sure what that meant at first; once he mentioned the words “ice cream,” however, then he certainly had my attention.

It’s hard to miss Little Man if you’re driving around: the store itself looks like a giant milk jug planted right in the middle of the neighborhood. We rolled up to the store around 5 p.m. that day, and Andrew remarked how incredible it was that there wasn’t the usual long line that snaked up the street. Awesome! We walked right up to the counter and started looking over what kind of flavors they were carrying for the day. The signage for the flavors is pretty cool: each flavor tile is hand painted with a different design. 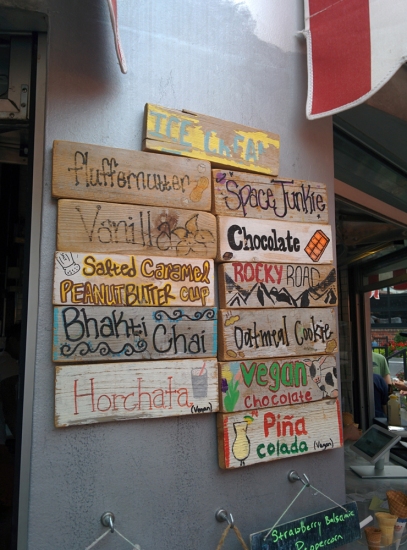 Andrew said the waffle cone is a good choice, since they made those fresh on the spot. I took his suggestion for the waffle cone and after sampling some flavors at the counter, I went with two scoops of salted caramel peanut butter cup and oatmeal cookie.

Both flavors were decadent and had individual flavor profiles that set each apart. The salted caramel peanut butter cup had the rich caramel flavor infused in the ice cream and peanut butter cup chunks scattered throughout, with the added salt making each lick taste sweeter. The oatmeal cookie had a great balance of oatmeal flavor combined with hints of nutmeg and cinnamon that came as an aftertaste. Those two whole scoops towered on the waffle cone and was probably enough to be a meal in itself.

Having ice cream as good as that also has a downside: by the time I realized I forgot to take a picture, I was already half way done with eating the cone. Lucky for me, we decided to come back the very next day for a second helping (where the flavors actually had rotated again). And this time, I got the cone photo I was looking for. 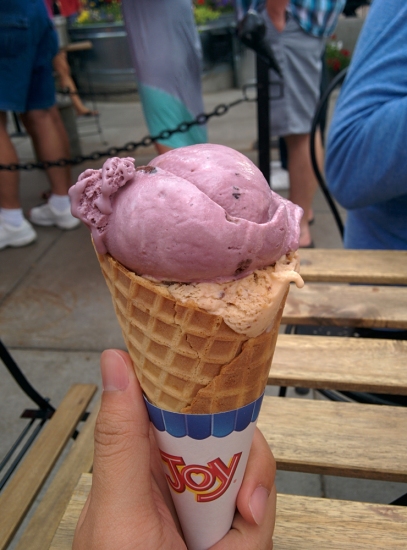 I only went with one scoop this time, but split that into two flavors. I kept the salted caramel peanut butter cup (it was really good), but switched it up with “Space Junkie” instead of the oatmeal cookie. Blue raspberry ice cream with chocolate fudge and brownie bits mixed in made the Space Junkie flavor hard to resist. As the guy at the counter put it, “It’s out of this world.” Gotta give the man some credit for coming up with that on the spot.

I’ll be honest: I’d probably gain a lot of weight if I lived in any of those apartment buildings next to Little Man. They have such an eclectic selection of flavors to rotate through, and from my impression of the three that I tried, I’m sure that they would all be pretty good in their own respects. To the next time that I can visit Little Man, and another flavor to knock off the list.

Here are my rankings for Little Man Ice Cream:

So many flavors, so little time. All three of the ones that I tried tasted fantastic, each separating itself from the next with distinct characteristics.

A number of tables set up in the area right next to the store make for a great spot to hang out, chat, and enjoy some ice cream.

The people working the counter are really personable, and they don’t hesitate to answer any questions about the flavors or let you sample them.

This ice cream is on par with other desserts (like frozen yogurt or bakery items) in terms of pricing, but the quality makes it worth the while.