The end of July meant it was time to head out west to northern California, where my good friends Andrew and Angie were getting married. I took an early morning flight out of Orlando and arrived into San Francisco around midday, with about six hours of downtime before my friend Mark arrived into town as well. Taking advantage of the free time, I had talked with my cousin Linda and her husband Daniel prior to the trip about meeting up for a quick lunch. After I had picked Daniel up from his office, he made a good point that I had come out to visit the Bay Area every year since 2015. It’s certainly a tradition I wouldn’t mind continuing in the future!

Linda and Daniel had ended up being the ones that introduced me to Afghan cuisine back when I visited in February 2015. That sampling certainly left an impression, and I went on a bit of a kick trying to find it again after coming back to the east coast. (It was actually how I discovered and reviewed Afghan Kabob out in Springfield, VA.) This time around, we were off to introduce me to another cuisine. Linda suggested that we go to a Burmese restaurant they knew of in downtown Burlingame called Mingalaba. I’m always down to try some new food and had never had Burmese food before, so I walked into the restaurant with an open mind.

Once we sat down, Linda and Daniel mentioned that they’d order for me; I had absolutely no issues with letting the experts guide the way! They chose a nice spread of dishes, ranging from salads to noodles to meats. Once our waitress cleared the menus from the table, I took a quick look around the restaurant. It was actually a relatively smaller place, maybe only able to accommodate 30 – 35 people in the dining room, with a couple of tables out on the sidewalk as well. Linda mentioned that we had gotten extremely lucky to find a table immediately, since she had passed by the place a few times before and there has always been a line of people waiting. I guess we had timed it just right to avoid the major lunch rush.

It wasn’t too long before the two salad dishes came out of the kitchen: the tea leaf salad and green papaya salad. The tea leaf salad preparation was actually done tableside, where a waitress brought out a dish with all the ingredients separated and then would mix everything together. Cabbage, tomatoes, fried garlic, jalapeños, peanuts, soybeans, sesame seeds, and Burmese tea leaves all mixed together to provide a wonderful flavor combination of savory and spicy, along with a texture contrast between the soft vegetables and crunchy peanuts & soybeans. It was a really refreshing dish that opened up the palate while at the same time didn’t feel too heavy.

On the other end of the flavor spectrum, you had the green papaya salad. Fresh strands of papaya with thinly sliced red onions, dried shrimp, crushed peanuts, and sesame seeds, tossed in a special savory dressing and garnished with cilantro. It was also a very refreshing dish, focusing mainly on the sweet flavor, complimented with hints of spiciness from the dressing. Between both the salads, they functioned well as appetizers for the meal.

Our trio of main course dishes arrived almost one after another, with the noodles arriving first, followed by the chicken, and then the beef. I took a quick sample of each dish before going back for another round, and I think that the noodles and chicken were probably my favorites out of the three.

The house special noodles, consisting of flat rice noodles mixed in with coconut chicken, onions, crispy thin noodles, and garnished with cilantro, made for a nice flavor combination of savory, spicy, and slightly sweet. The noodles also helped to soak up some of the flavor from the sauce that it was tossed in. The basil spicy chicken was a relatively straightforward dish as well, but packing a good amount of flavor too. Chunks of chicken cooked with green bell peppers, tomatoes, onions, jalapeños, and fresh basil, the dish really allowed you to get a culmination of savory and spicy flavors with every bite. I probably would have been pretty happy with just a bowl of rice and a plate of the chicken on the side.

As an introduction to Burmese cuisine, I was definitely pretty impressed and would like to explore the food some more. While some of the flavor profiles I was familiar with from eating Chinese food, there were other dishes that surprised me of how different and delicious they were (the tea leaf salad is a great example). Unfortunately, I don’t think central Florida has as many opportunities to try Burmese food, but I’ll have to keep an eye out the next time I’m back on the west coast.

Let’s now take a look at the Mingalaba Dish Spotlight. Asterisks (*) below mark my recommended dishes. 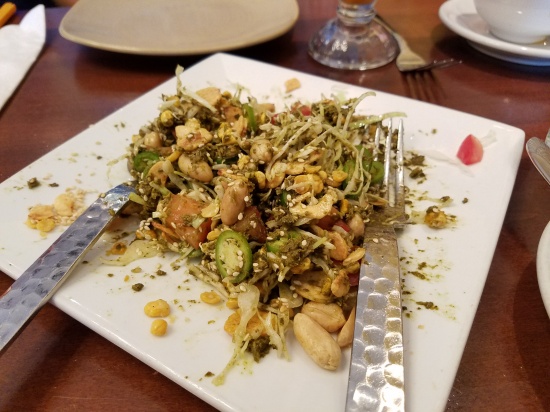 And finally, here are my rankings for Mingalaba:

With quite a few different options on the menu that offer a diverse range of flavors, you’re probably bound to find something you’d enjoy. Linda and Daniel helped choose a great array of dishes to introduce me to the cuisine.

With ornate Asian artwork and decorations scattered around the interior of the restaurant, you really do feel immersed into the culture a little bit. The dark wooden tables also do well to accentuate the decorative theme.

The waitstaff were very friendly and stopped by frequently to make sure our drinks were taken care of. The speed of the food coming out of the kitchen was relatively quick as well.

Since we ordered off the lunch menu, there’s the possibility that the pricing may be skewed a little bit. But with the per person price turning out to be under $13, it wasn’t too bad at all.