During my trip to San Francisco, my friend Mark and I were staying at an Airbnb in the neighborhood of Noe Valley, which was only a little west of the Mission District. I had always heard that Mexican food was an absolute staple in that neighborhood, and I’d be remiss if I didn’t take advantage of that opportunity to have some while staying so close.

Mark arrived into the area around 6:30 p.m. that night, so we didn’t end up checking into the Airbnb until probably 7:00 p.m. By then, both of us were pretty famished, so we decided to take a look around for some recommended places to grab some Mexican food. Our Yelp search yielded a few different spots, but La Taqueria looked the most solid with favorable reviews and a high star count after 1000+ ratings. I also asked for recommendations from our Airbnb host, Naomi, and she mentioned that La Taqueria was one of, if not, the best spot for Mexican food in the area. With such glowing recommendations, how could we turn elsewhere?

After a short Lyft ride down to the restaurant, we got let off right on Mission Street, the main street of shops and restaurants running through the neighborhood. This place was absolutely packed: every seat was taken, with people chowing down on tacos, burritos, and chips & salsa. The line to order food spanned around the walls of the restaurant and was starting to spill out the front entrance. I guess we were about to find out if the food was worth the wait.

Even though your choice of main food was down to either tacos or a burrito, it was the meat selection where the variety came in. You’ve got your main staples (like chicken, carne asada, carnitas, or chorizo) and then some more adventurous options (like beef head or beef tongue). We ended up only being in line for about 10 minutes (it was moving rather quickly) before we were at the counter to order. I stuck with the chorizo and carne asada while Mark went with the chicken and beef tongue (lengua). We also got an order of the chips with salsa & guacamole to split.

It was a pretty efficient ordering system that they had going. Once you reached the beginning of the counter (where you could see the staff assembling together all the tacos and burritos), someone would take down your order and by the time you reached the end where the cash register was to pay, your food was almost ready. In our case, I think they were a little backed up from the volume of people coming in, but we probably only had to wait for another minute or so after paying before we picked up our food. All the seats inside the restaurant were still taken after we had gotten through the line, but we got relatively lucky and were able to snag some counter seating right outside along the front of the restaurant.

If there was one word that overwhelmingly stuck out while digging into the food, it was the word “fresh.” Everything tasted absolutely phenomenal, and you know from the very first bite why this place was highly touted by locals. The chips served with the pico de gallo and guacamole was spot on, with the bright flavors from the salsa shining through. Both of the tacos I ordered were equally as delicious, with the double-wrapped corn tortilla crisped up just a little bit on the edges. The meats, cheese, beans, pico de gallo, and guacamole all combined for a savory flavor bomb that left you going back for another bite.

It’s hard to pick a favorite between the chorizo and the carne asada, since each one had its own characteristics that made it delicious to eat. For the chorizo, I thought that it was well seasoned and cooked enough to have some of the smaller pieces get crispy. The carne asada was also cooked very well, with no slices of the beef coming out chewy at all. Given how good that food was, I’m almost certain that I could have easily downed an additional two tacos.

For the first night’s meal after arriving into San Francisco, authentic Mexican tacos really hit the spot. Earlier in the day, Mark and I had been torn between going for either burgers or tacos, but I’m very glad that we ended up choosing the latter. Don’t let the line of people intimidate you from grabbing some food at this place, since the wait ended up being worth every minute. If I happen to be in the area again, there’s no question of where I’ll be stopping to pick up some tacos. 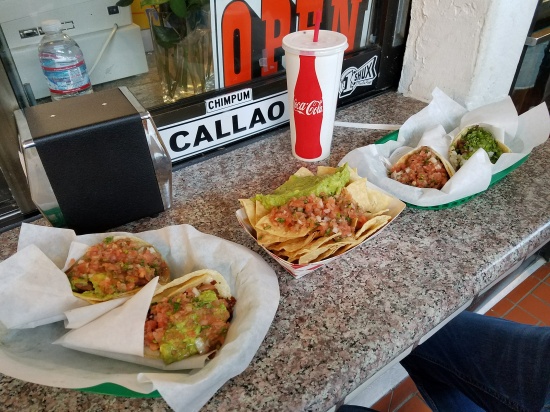 And finally, here are my rankings for La Taqueria:

Fresh. Delicious. Mouth-watering. There is no question that the quality of the food was top-notch. Even though they were serving primarily tacos and burritos, they do both very well, and that’s what keeps drawing people back for more.

I would not say that this place is built to be a sit-down restaurant, more of a “grab & go” type of place. There is seating inside, but mostly consisting of long benches or tables packed in pretty close to each other. You might need a little bit of luck to grab a seat, too, with how consistently crowded it was.

The speed at which the staff was cranking out orders was pretty remarkable. It never really backed up more than three orders of food at a time, and even if it did, you were waiting less than five minutes for them to finish. The lady that took our orders was also very friendly and helped to answer some questions we had on the menu.

Tacos or burritos usually have a reputation for being “cheap eats,” and here it was certainly no exception. Each taco was $3.50 and the chips (with the salsa & guac) were $4 or $5. With Mark and I splitting the chips, the food price came out to right around $10 per person. For the freshness and quality of the food, you really can’t beat that. (Side note: this place is cash only.)