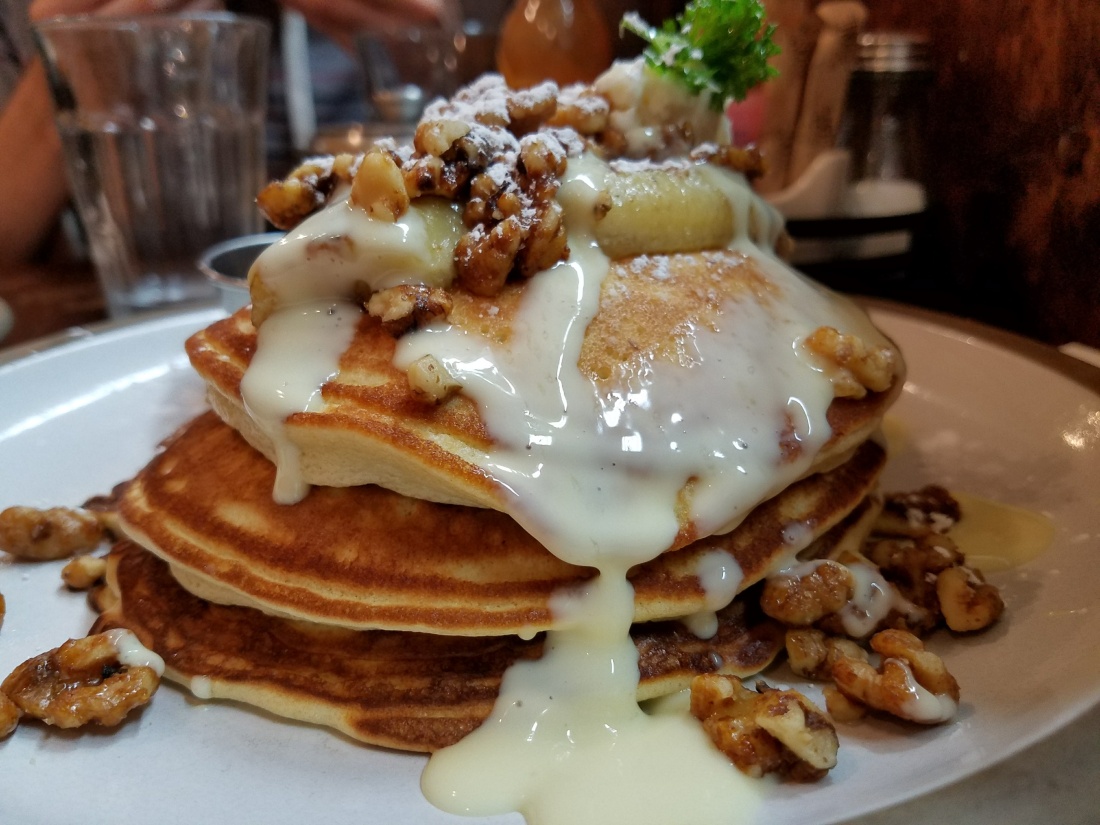 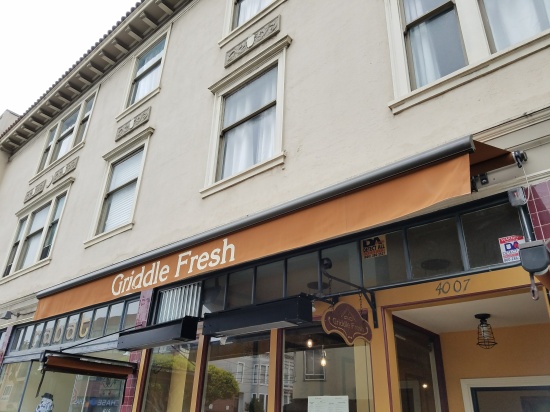 It was Saturday morning, the day of the wedding that my friend Mark and I were in town to attend. Since the wedding wasn’t until later in the afternoon, we actually had a good chunk of the day to go back out into the city and sightsee. Our only real planned stop was to head down and see the Painted Ladies, a row of colorful houses made famous by the intro of the television show “Full House.” But all good days start with a hearty breakfast, so that’s where we headed to first.

One of the things that I like to do when staying at an Airbnb is ask the hosts if there are any places that they would recommend to eat. Our host Naomi gave us quite a few different places that were located right near the house, one of which was Griddle Fresh. Since we were checking out of the Airbnb that morning, we loaded up our stuff into the car and drove just right down the street to where the restaurant was.

By the time that we arrived, the place was already bustling with patrons and we put our name onto the waitlist that was already four parties deep. It was a smaller dining space, but the table arrangements certainly made the most of it. Featuring a mix of two- and four-person tables, the area could probably accommodate 30 – 35 people, with an additional four people that could be seated outside (which also had heat lamps available if needed). After seeing a number of the local neighborhood spots, I think the average dining capacity for restaurants usually numbered around 30 or so people.

Before long, our name was being called and we were led to a two-person table situated underneath a cutout in a dividing wall looking into the kitchen. It made for some additional ambient noise on top of the dining room’s, but it didn’t really bother us too much. We cracked open the menu and began to pursue the bevy of options that they had available for food.

Let me tell you, it was extremely difficult to decide. From benedicts to pancakes, french toasts to breakfast sandwiches, everything sounded scrumptious. But I was in a mood for pancakes for some reason, and those banana mascarpone pancakes were calling my name. Mark was feeling some savory breakfast options, so he ended up going with the 6 hour corned beef hash breakfast plate.

Despite the fact that the restaurant was pretty busy, the kitchen was efficient about cranking out dishes and turning over the tables so the line waiting was never too long. We received our food in probably less than twenty minutes, which wasn’t too bad at all. And the food certainly arrived just in time to start satiating our mounting appetites.

Visually, the plate of pancakes really drew you in. Three thick pancakes stacked high, topped with a fried banana and walnuts, finished with powdered sugar and a vanilla curd, it only took one bite of the pancakes to know that it was different than any others I’d had. The pancakes were so light and fluffy, achieving an almost pillow-like texture thanks to the mascarpone cheese that they whipped into the pancake batter. The fluffy texture was contrasted well with the walnuts and when you took a bite that also incorporated the banana and maple syrup, all of those sweet flavors layered together for a well-balanced dish.

The pancakes covered the sweet aspect of the meal; the hash browns and corned beef hash comprised the savory part of the meal. Most of the time I’m used to hash browns being arranged in a pile, but both times I had it during breakfast in San Francisco, it came out in a rectangle. Since the layer of potatoes was pressed thin, it allowed for the hash browns to crisp up pretty well. I also got the deluxe option, which added on sautéed peppers & onions, bacon, and shredded cheddar cheese on top of the hash browns as well. It made for a great side dish compliment to my hefty stack of pancakes.

Mark’s corned beef dish was a lot of food on one plate: a heaping pile of chopped corned beef topped with two poached eggs, wedge fries cooked golden brown, and some slices of toast. He only let me try a few bites but then had to cut me off because it was way too good to share. The corned beef was moist and packed full of savory flavor, which also doubled as a great food item to mop up any yolk from the poached eggs. Wedge fries were fried to perfection, being crispy on the outside but still soft on the inside. No matter a sweet or savory dining option, both of them ended up being winners.

There’s a reason that this neighborhood spot is touted by locals when asked about where to find some good breakfast. After our meal here, we were all set with another day of adventuring around the northern California area. With an eclectic selection of dishes ranging from sweet to savory flavors, Griddle Fresh will certainly not disappoint your appetite, and you definitely won’t leave hungry. 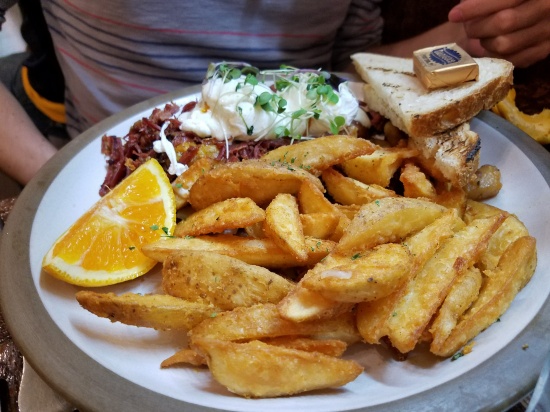 And finally, here are my rankings for Griddle Fresh:

I’m not sure if I can rave any more on the food than I already have. Hearty and delicious are certainly two words that quickly come to mind, and that’s only after trying a small number of the dishes they offer.

Even if it’s a little packed inside the quaint dining space, I think that the noise of the kitchen and bustling of the waitstaff made the place feel lively.

Our waitress was attentive and answered a few questions that we had about the menu. She also returned periodically during the meal to check and see how we were doing.

Be prepared that you’re going to be paying some city prices for the food here. But even if the dollar amount is a little higher, the portions and food quality certainly make up for it.