Inspiration for new recipes to try sometimes comes from unexpected places. The latest example: from the recipe e-mail digest I periodically get from the website AllRecipes. Their featured recipe in that particular e-mail was bulgogi, which is Korean-style BBQ beef. Featuring thin slices of beef marinated in a sweet and spicy sauce, the dish didn’t look too hard to attempt and I already had most of the ingredients in my pantry. It was time to give making Korean food a shot.

Thin slices of beef soak up all the flavors of the marinade, leaving you with a sweet, savory, and spicy flavor combination bite after bite. 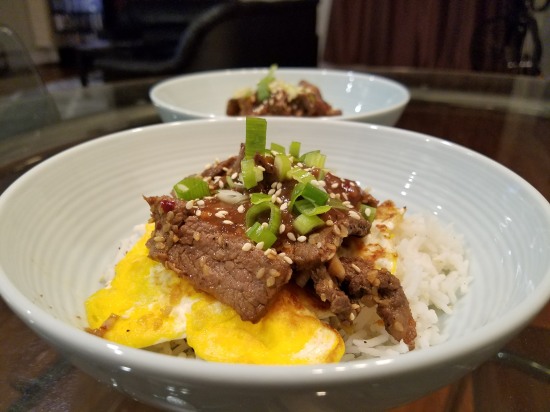 For the first time making this dish, I really didn’t know what to expect. But the end result was delicious. The meat itself had that nice mixture of sweet and savory flavor to it, and each bite that you took gave you a lingering heat that came from the chili paste, but not so much that would build up and overwhelm you.

Two things that I want to experiment with on future attempts of the dish:

Despite my curiosity to experiment a little bit, I was very happy with how it turned out. My friend Catherine gave it her seal of approval as well, and I’m looking forward to giving the recipe another go.

I was interested to see how this same recipe could potentially adapt to using the slow-cooker instead of the stovetop. One thing I was looking for was to achieve that “melt-in-your-mouth” consistency while packing that same level of flavor that this marinade combination provides. If you are interested in using this alternative cooking method, here are the slight deviations you would need from the above recipe: