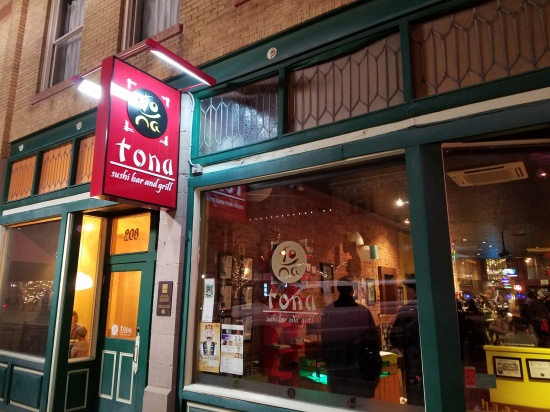 With an unseasonably warm evening, my friend Tina and I decided to head down to Ogden’s Christmas Village and spend some time walking around. Granted, it could still be considered cold with a temperature sitting in the low 50’s, but normally it’d be closer to 32 degrees around this time of year. We were out there for at least a half hour or so, with me trying to get some nighttime photos of the Christmas lights with my DSLR camera. All that walking helps you to build up an appetite, and Tina knew of a sushi spot near the downtown area that was within easy walking distance.

We arrived at Tona Sushi and the place was certainly bustling with activity. It was 7:00 p.m. on a Saturday night, the primetime for dinner service. We were quoted a wait of about 45 minutes, but luckily we had eaten later in the afternoon and weren’t in a rush to quell any hunger pangs.

In the main dining area, you had a mix of two- and four-person tables that could altogether probably accommodate no more than 24 people or so. You could also squeeze in probably 8 people at the sushi bar, but since the space was a little smaller, you have the chance of feeling crowded.

One neat thing that the restaurant did offer though was a semi-private dining area, featuring tables that were set into an elevated floor, complete with a cut-out that you could sit in. You also have to remove your shoes prior to sitting down, leaving them right on the steps leading up to your table. The five tables in the room were only separated from each other by a vertically hung bamboo mat, giving you a small feeling of privacy while eating. The setup is a little difficult to explain with words, but I would recommend that if you’re making a reservation, ask to be seated in that private dining room, since it does give you a different experience than if you sat in the conventional dining area.

I think that Tina and I lucked out to get placed in the private dining area, since parties were leaving from both that room and the sushi bar at the same time. We motioned to the hostess to ask if we could sit in the side room and they had no issues with accommodating the request.

I had been to another Japanese restaurant before where you could sit cross-legged at the table with shoes off, but this was definitely a different experience. Our waitress Kaylee stopped at the table not too long after we got settled in, but we hadn’t had a chance to look over the menu in full yet to scope out the options.

If you’re there to get sushi rolls, you’ll have quite the variety to choose from. With a list of 30+ rolls, featuring different combinations of fish, sauces, vegetables, and garnishes, you’re certainly bound to find something that calls to you. Since the both of us weren’t too hungry (as we had previously eaten only four hours before), we decided to go light on the meal with two sushi rolls: the Hot Lava and the Red Devil.

There was only one other restaurant that I had tried a roll with jalapeño slices on top, and that was Nagoya Asian Bistro back when I was living in southern Maryland. I remember the subtle complexity that the heat from the jalapeños brought to the entire roll, so that made me look forward to trying the Red Devil, which featured the same thing. It wasn’t too long before our rolls arrived from the sushi bar, and we got to work straight away.

Between the two rolls, I think I enjoyed the Red Devil more. Featuring seared albacore and cucumber on the inside, topped with ahi tuna and a thinly sliced jalapeño, the roll gave the flavor of the fish full opportunity to shine. I usually don’t eat my sushi with any soy sauce, so it was nice to get the layers of both the albacore and ahi tuna to build on top of each other, finished with the heat from the jalapeño. The Hot Lava, which was snow crab salad, eel, and avocado inside, wrapped and lightly baked, also brought out a nice flavor combination of spicy and savory to match with the natural sweetness from the snow crab.

Imagine my surprise at finding this stellar sushi spot featuring a diverse selection of sushi rolls, modern ambiance, and great value. Tina and I had been deciding between Tona Sushi and another Thai restaurant, and I’m certainly glad that we chose the former. This place has certainly made it onto the list of spots to check out when I’m visiting my friends again, and I’m excited to sample the other rolls they have to offer. 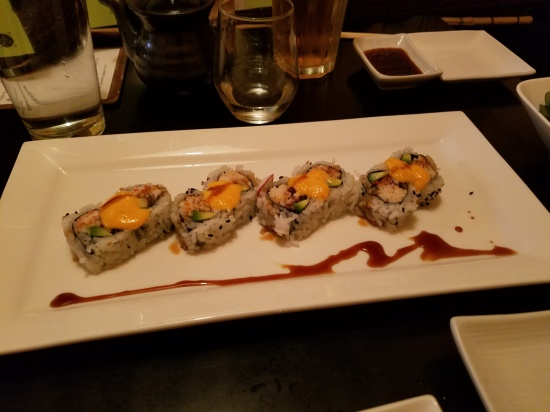 ** Hot Lava Roll **
Snow crab salad, eel, and avocado on the inside, lightly baked, and garnished with spicy sauce. 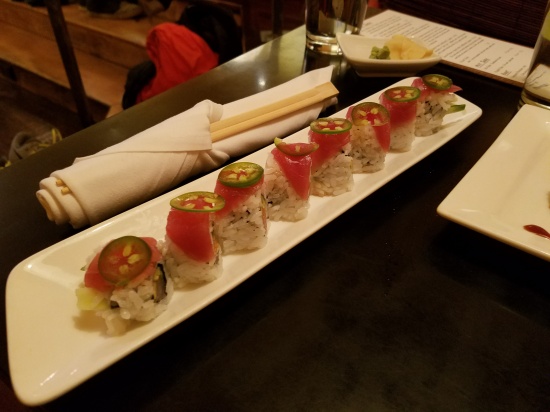 ** Red Devil Roll **
Seared albacore and cucumber on the inside, topped with ahi tuna and thinly sliced jalapeños.

And finally, here are my rankings for Tona Sushi:

With such a wide range of sushi rolls to choose from, you’re bound to find something you’ll want to try. All the ingredients taste fresh and the flavor combinations are excellent.

The restaurant décor features a more modern aesthetic, with glass and wood being the primary materials used. Lighting fixtures are well placed to provide adequate brightness to the dining areas, but still dimmed enough to make it feel a little more intimate.

Our waitress Kaylee did a great job making us feel welcome, stopping at our table often to check in and see how things were going. The sushi chefs were also expeditious in getting us out our rolls.

I thought that despite the use of some higher-end ingredients, a lot of the rolls were very fairly priced, especially for the quality.