Sometimes, there are moments where you try a new dish for the first time and it floors you with just how good it is. In most cases, when that happens for me, I also become inspired to try and take on the dish myself in the kitchen. This recently happened for me with the cochinita pibil tacos from Frontera Cocina.

My admiration for these tacos are pretty well documented in my blog post about the restaurant, but it was actually a side conversation that I had with my friend Carlos at work where we speculated about how we could make cochinita pibil at home. Trying the tacos at Frontera was actually my first exposure to that dish, so it made the research into the food even more intriguing for me.

Cochinita pibil is a traditional Mexican slow-roasted pork recipe, where the pork is marinated with citrus juices to help tenderize the meat as well as a dynamic spice blend to impart additional layers of flavor. At the heart of that spice blend is achiote (known as annatto in the U.S.), which provides a peppery and earthy flavor and gives the meat that vibrant red-orange color.

Typically, a recipe would call for the pork to get marinated over an extended period of time. From what we found, however, the advantage of using the Instant Pot is that the pressure cooking process infuses the flavor into the meat without the need for marinating. 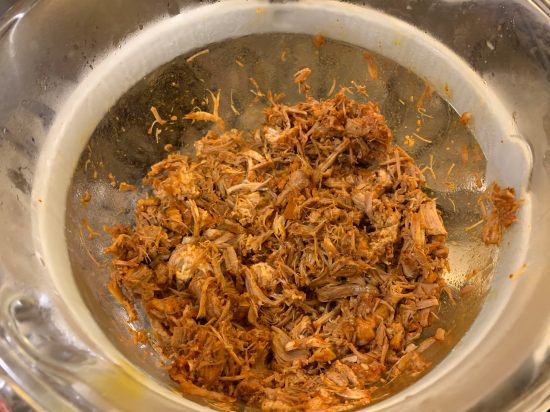 The meat is cooked right to the point where it shreds easily, but can still maintain some larger chunks to provide textural contrast with each bite. 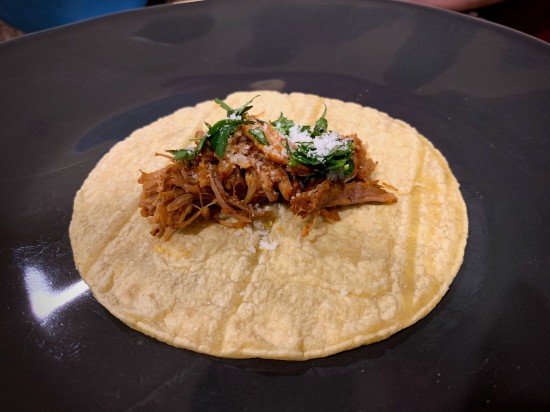 This is where I was most impressed with the fact that we had not marinated the pork at all before cooking it. The pork was just so full of flavor that each time you took a bite, you might get a different flavor note. The orange and lime juices impart those slightly sweet and tangy flavors into the meat, while the achiote paste and corn tortillas really brought in the earthy elements to the palate.

Consisting of a mix of achiote, cumin, oregano, black pepper, cloves, and cinnamon, the paste itself really provides the core of where the earthy flavors in the meat come from. The cilantro and fresh-squeezed lime juice on top make great condiments for the taco, since it both balances with the flavors in the meat and also provide a bit of an edge to each bite as well.

From a cooking standpoint, I think this was a first-time home run. I told my friends that we were wandering into “experimental kitchen” territory with this one, since the recipe itself was a blend of elements from three different ones. But I couldn’t have been happier with how it turned out. I’m sure that my friends who downed five or six tacos each after we finished cooking would also attest to that.