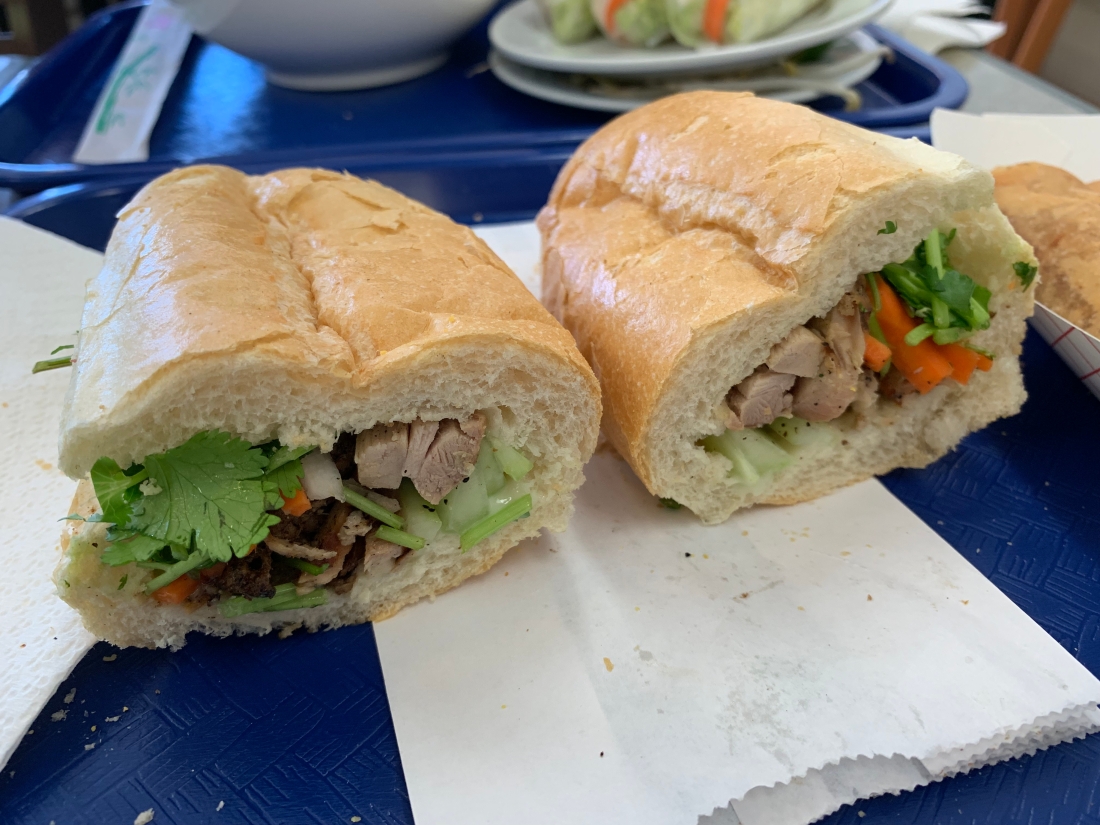 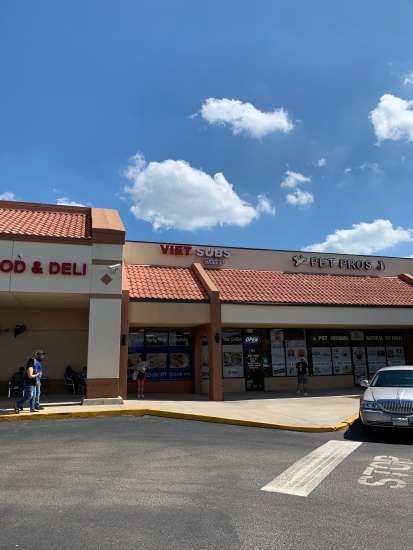 Although I haven’t tried it many times, bánh mì is the second food item that I would associate with Vietnamese food, with pho taking the top spot. For those that aren’t familiar, bánh mì is a Vietnamese sandwich, normally consisting of meats topped with shredded carrots, pickled daikon, and fresh cilantro, all served on a baguette.

My friends Andy and Emily were the ones that first introduced me to the sandwich at a spot in Old Town Alexandria when I was living up in the D.C. area. Ever since then, I’ve been a fan of the sandwich and have been on the lookout for new places to try them.

Funny enough, I found this place just down the street from where I live that serves up some bánh mì. I happened across it since I shop at the Thrifty grocery store right next door, and this past weekend my friend Carlos and I decided to stop by. 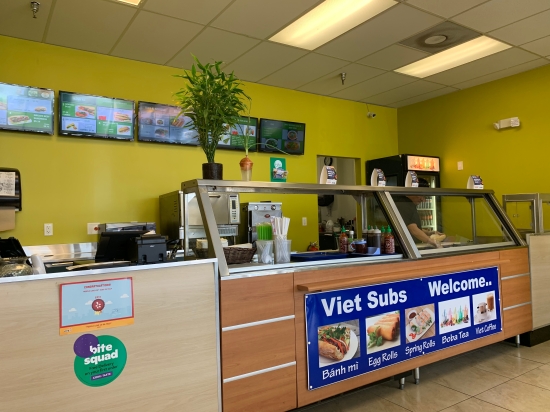 Whether it’s a good or a bad thing, I’ve been in enough Subway restaurants to be able to generally recognize their equipment and dining tables. From the moment I stepped into Viet Subs, I knew that it had been a former Subway franchise location. The tables, soda fountain, menu displays, even the sandwich prep counter that had all the ingredient bins had been retained. However, seeing as the place would be going from a sandwich shop to, well, a sandwich shop, it made sense from a business perspective to re-purpose all of that equipment from the former owners.

In addition to the bánh mì, Viet Subs also does serve pho, which is what Carlos ended up getting. The restaurant offers a selection of deep-fried egg rolls and Vietnamese spring rolls, in addition to boba tea. Out of the three different meat options for the bánh mì (chicken, pork, or beef), I ended up going with the classic chicken bánh mì, along with a side order of pork egg rolls.

For any sandwich, the bread always plays a key role in helping to tie everything together. With this bánh mì, it was certainly no exception. A fresh hoagie roll that was soft on the inside but crispy on the outside made for a great vessel to carry the diced lemongrass chicken, cucumbers, carrots, pickled daikon, and cilantro. The flavors from the vegetables were bright and fresh, exactly what I was looking for in the sandwich. The chicken did provide a savory element, although I was hoping for a little bit more of a pronounced flavor.

As for the pork egg rolls, those packed more of a flavor punch than I was originally anticipating. They were filled with a mixture of minced pork, rice vermicelli, and black pepper, the last of which gave each bite of the egg roll that lingering spice heat. Each one was fried to a nice golden-brown and crispy on the outside.

I’ll be honest to say that the dining atmosphere is a bit lacking in the restaurant, which makes me think that getting the bánh mì to-go would be the best option. (In fact, we saw quite a few people do that while we were sitting there eating.) Given how the sandwiches are prepared, I think that they would hold up pretty well. It’s comforting to know that even if I did start developing a craving for bánh mì, there’s a spot just down the street that I could hit up to keep myself satisfied.

And finally, here are my rankings for Viet Subs:

Even though there might not be a large variety to choose from, the restaurant did well with what they did offer. My bánh mì had nice, fresh flavors, and didn’t feel too heavy (which is what I like about a bánh mì). The egg rolls were a nice side to complement the meal as well.

All the décor from the restaurant echoes from its former life as a Subway location. With a lot of people seeming to get the food to-go, it almost ends up creating a bit of a muted atmosphere in the dining area.

Your order gets placed up at the counter before you go have a seat and wait for your food to get brought out to the table. Carlos and I both waited minimal time before our items came out to us from the kitchen.

Sandwich, side of egg rolls or spring rolls, and a drink, all for just under $9. I have to say, that amount of food is definitely a great bargain for what you pay.