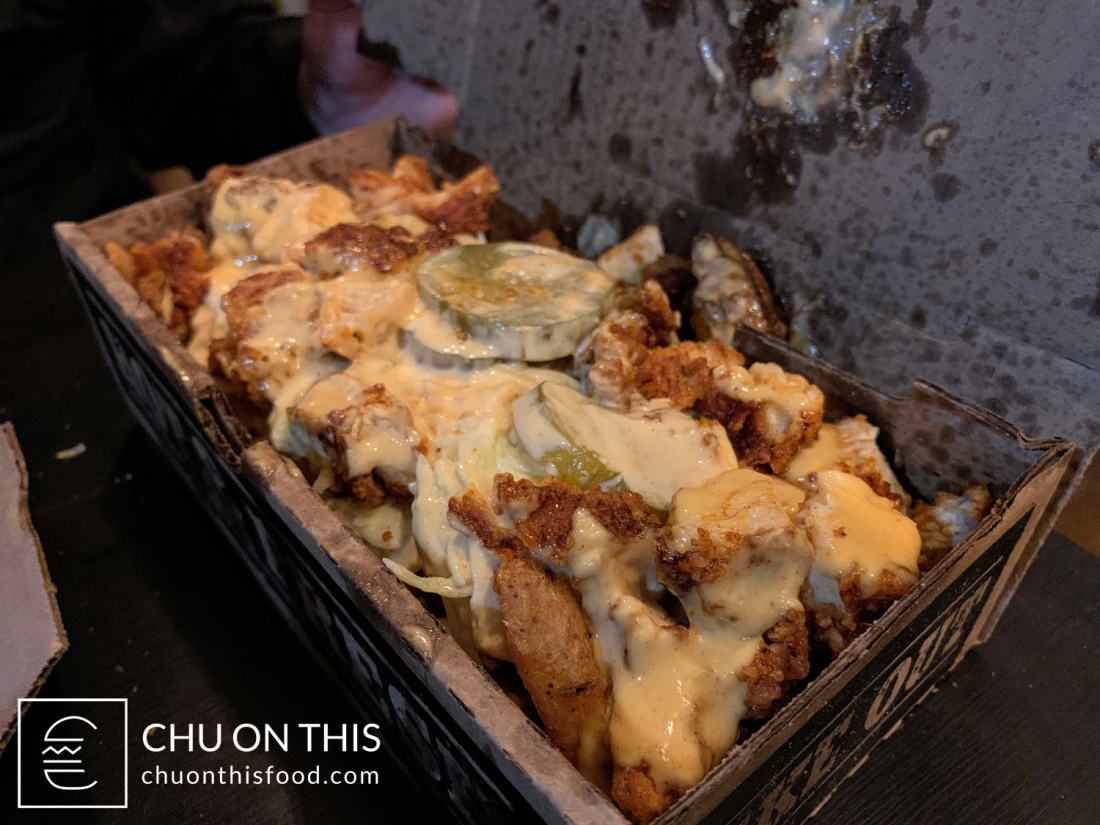 The market for hot chicken in the Antelope Valley had always remained relatively untapped, with there not really being a local place that specialized in it. (Blazin’ Wings from Buffalo Wild Wings don’t count.) That had apparently changed, as on my recent business trip my friend Matt gave me a heads-up about this new spot that had opened up on Lancaster Boulevard called Sassy Bird. He told me that the portions were huge and the chicken was worth the stop, so my other friend Hoang and I decided to give the place a shot one weeknight after work.

I’ll admit that I hadn’t been back up to the Lancaster Boulevard area to explore for probably five years, so the number of local shops that had popped up since then was pretty significant. Sassy Bird had set up shop in a corner storefront, with pretty limited seating (capped to about 16 people) and everyone else having to opt for their orders to-go.

Since the inside is pretty small, the staff member that takes down your order is situated pretty much right next to the entrance when you first step in. Their menu features combos of either chicken tenders or chicken sandwich with fries, with the option to sub out tater tots for the fries. If you were feeling like busting out the fork, there was also the option for doing “loaded” fries or tots, topped with chicken tender pieces, pickles, cole slaw, and the “Sassy Sauce.” I’ve come to think that I can decently handle spicy foods, so I went with the “hot” level for my chicken sandwich. On their scale, it went regular -> mild -> hot -> Sassy AF. Time was going to tell if I had made a wise decision or not. 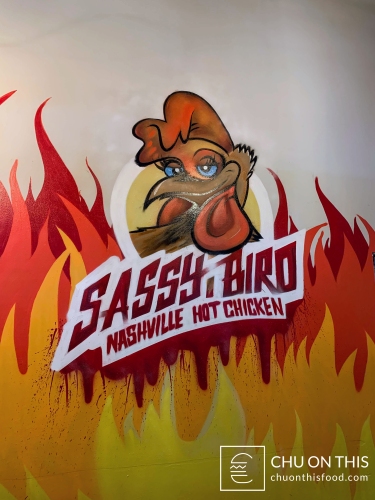 The one comment that I had seen when looking up the place was regarding the wait time for the food. Because the restaurant was set up kind of like a fast-casual spot, I’m not sure if people had their expectation that you would order and be out the door really quickly. It seemed like the kitchen staff was frying the chicken to order, which would explain the extended wait times. After all, you don’t want to be taking a bite into your sandwich just to find that the chicken is raw. I feel like Hoang and I probably waited no more than five minutes before our food was ready to get picked up at the counter.

My fried chicken breast in the sandwich was absolutely massive. It had to have been a little over 1″ thick after all the breading on the outside. I caught a waft of those hot spices coming off the chicken, and I knew my taste buds were about to get lit up. I went in for that first bite and was just barely able to squeeze in the bun, chicken, and cole slaw into a complete bite. It didn’t take long for those spices to kick in, and I was definitely feeling the heat. 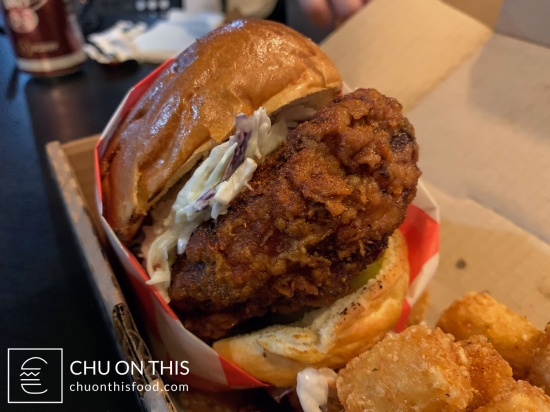 The spice was definitely more potent than I had anticipated; I’m sure glad that I decided to pick up a bottle of water when ordering. I did find, however, that the chicken breast was a little bit on the dry side, possibly due to cooking it longer in the fryer because of how thick the piece was. Flavor-wise, it was a bit more on the one-dimensional side, with the burn of the spices taking center stage. That’s not necessarily a knock on the fried chicken, however, since my expectation was just more on the spiciness end of it. Some other added flavors from dry spices to help make the burn more enjoyable though would probably have been a nice touch.

As a bit of a bonus, while Hoang and I were sweating through our chicken sandwiches, one of the guys came out from the kitchen and mentioned that they had put together an extra order of loaded fries on accident and asked if we were interested in them. I mean, we’re not ones to turn down some free food (especially when the loaded fries are normally $11), so we happily accepted them. The combination of all the ingredients into the box, topped with that “Sassy Sauce,” which I think is a chipotle buttermilk ranch, was really delicious. The chicken strips being all chopped up also made it pretty easy to eat. I think that next time, I’m going to go with the loaded tots instead of the sandwich, because it was easier to eat and overall had better flavor, in my opinion.

Sassy Bird has been only open for a relatively short amount of time and has already garnered a ton of popularity. From the sound of it, the fact that Hoang and I were even able to try the food was a plus, since someone else at work told us the restaurant often sells out quickly. One suggestion that I have for the chicken sandwich is to pound out the chicken to flatten it to allow for easier eating and more even cooking across the entire piece of meat. But outside of that, Sassy Bird has made it onto my list of places that I’ll return visit when I’m back in the area for another business trip. Definitely head over there to check the place out (if they don’t sell out first). 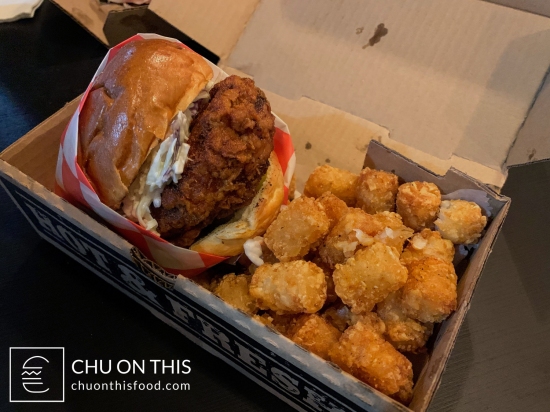 ** Chicken Sando & Tots (Spice Level: Hot) **
Fried chicken breast served on a bun with cole slaw and pickles. Pictured with a side of tater tots.

And finally, here are my rankings for Sassy Bird:

Those loaded fries actually made enough of an impression to give this rating a bit of a boost. The flavors really mixed together really well within all of those ingredients. The hot chicken itself delivered exactly what it was supposed to, although the chicken being slightly on the dry end detracted from things slightly.

The seating inside is not that much, so Hoang and I were lucky to snag a table just as another group was leaving. The walls have fire designs painted on them (aptly so), along with the restaurant logo painted up on the wall right as you walk in.

The wait times for our food were relatively quick. I’m not sure if maybe we got lucky and hit up the place just at the right time that they weren’t swamped. Bonus also for the fact that the staff offered up an extra order of food created by mistake to people in the restaurant and not just throwing it away or letting it sit until a future customer ordered it.

The price points might lean a bit on the expensive side (my sandwich and tots was $13), but I think for the quantity of portions that you get (especially for those loaded fries), it’s money well spent.