EVERYTHING IS BETTER WITH BACON.

With the football season in full swing, that also means that it’s tailgate season. With tailgate season, there emerges all of those hearty foods that we love to eat bright and early on a Saturday morning before the football games: burgers, hot dogs, bratwursts, chili, chicken wings, you name it. I’m in a student organization at school called the Purdue Student Engineering Foundation (PSEF), and last year we decided to bring back tailgates for our organization. I took on occasionally making burgers for those tailgates, and now this tailgating season, I’m back at it again. Last week, I made my cheddar onion burgers, which were really well-received by a lot of people that were at the tailgate.

In these past two weeks that we’ve had a break from a tailgate, I’ve been thinking about how I want to change up the food each week, since I’m planning to help make food for the tailgate every time that we do it. So, I came up with the idea to alternate through different “burgers of the week.” Last week was cheddar onion, now this week is a BBQ bacon cheddar burger. Here is a sneak preview. 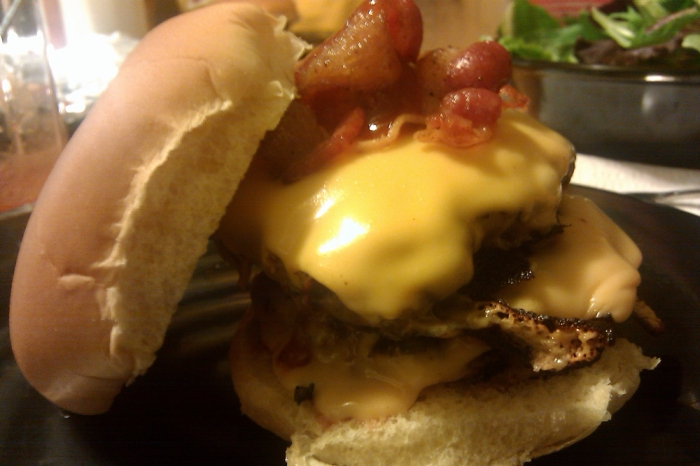 Start off by frying up the bacon in a pan until they are all nice and crispy. Wait for a bit for them to cool off before you cut them up into smaller pieces. Then, add in everything into the meat and mix things together. Be sure for the spices to not dump them right into the bowl, but rather to sprinkle them evenly over all of the meat, mixing while doing so. Adding in the egg will act as a bonding agent for the meat, but the breadcrumbs will add some balance to soak up any excess moisture.

Cook them up over the stovetop or on the grill for about 3 – 4 minutes per side. When you flip it over the first time, take a small spoonful of BBQ sauce and put it right on top of the burger, spreading it out so it’s a nice and even layer. Use your own discretion about how much BBQ sauce to use; I wanted to make it so that there wasn’t a ton of BBQ sauce that it would overwhelm all of the flavor of the meat, but rather just to give that taste of BBQ. Once the BBQ sauce is applied, throw that slice of cheese on there. After that side finishes cooking, pop it onto a bun, top it off maybe with a little more bacon, and you are good to go. This burger is a slight modification of what I had with those cheddar onion burgers, but the taste is definitely different from before. The added elements of bacon and BBQ sauce really add more depth to the burger as a whole.

And if you don’t believe me when I say that bacon makes everything taste better, take a look at what these crazy Canadians have to say.