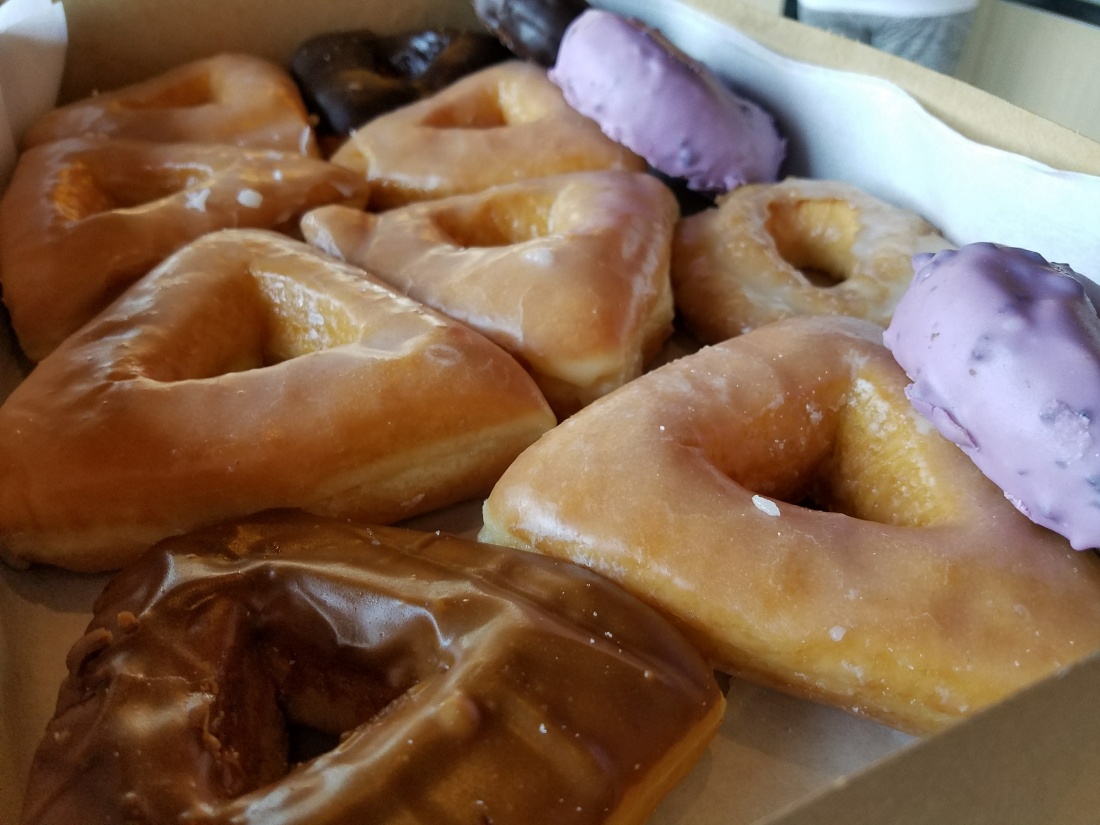 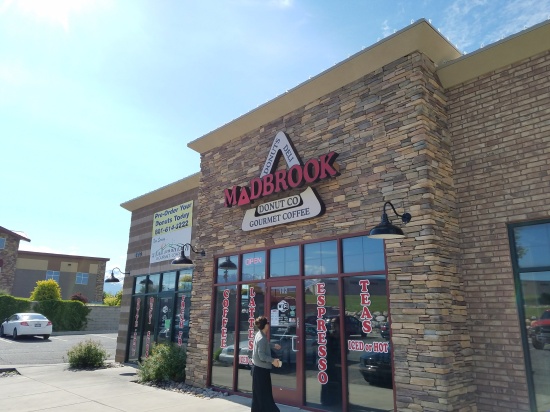 No trip out to see my friends Mike and Tina is complete without finding something to quell our sweet tooth cravings. Saturday morning rolled around and I tagged along with Tina while she had an appointment at a local shop in downtown Ogden. On the way back to the apartment, we decided to take a slight detour and hit up Madbrook Donut Company to bring back some breakfast.

Once we walked into the shop, Tina did my already-waning diet no favors by saying that we were going to grab a dozen donuts. There was a glass display case situated right when you get into line, showing off all the fresh batches made that morning. When a type of donut in the display case ran out, there were mobile racks filled with trays of additional donuts, ready to swap out in a moment’s notice.

Featuring a mix of cake and yeast donuts, Madbrook certainly had quite a variety to choose from. Their signature style appeared to be the triangular shape of their yeast donuts, which was also represented on the store’s logo. Tina and I split up the selection duties: she loaded up the box with a half dozen original glazed and one maple glazed, while I finished it with a chocolate glazed, two blueberry cake, a sour cream cake, and a chocolate peanut butter cake. It certainly made for a very diverse sampler of the flavors Madbrook had to offer.

The ride back to the apartment was rough, since the smell of the donuts wafted its way around the inside of the car. Once we got back into the apartment though, everyone went to town. I took a knife out and starting cutting up some smaller pieces to sample; boy, were those original glazed donuts pretty spot-on. The inside texture was light and fluffy, exactly how you would want a yeast donut to be, with a thin layer of glaze on the outside that gave it just enough sweetness.

I switched over to sample one of the blueberry cake donuts and while it was still very flavorful, the cake texture certainly felt a little more dense. Now, I’m normally more of a cake donut type of guy, but in Madbrook’s case I think I preferred the delicate nature that they were able to execute the yeast donuts and turn them into little “pillows of sugar.” Experience definitely guided Tina’s choice of loading up the box with six of the original glazed donuts, and I’m definitely glad that she did. I think by the time that we had finished the first round of attack, only a little over half the donuts remained standing.

Whether you’re looking for a breakfast fix or happen to get a donut craving in the middle of the afternoon, you can’t go wrong with stopping by the Madbrook Donut Company. With such a wide variety of donuts to choose from, they’ll certainly have something to fit your mood. But don’t take just my word for it: Madbrook made it onto Food Network chef Alton Brown’s list as one of his 14 favorite donut shops in the country. 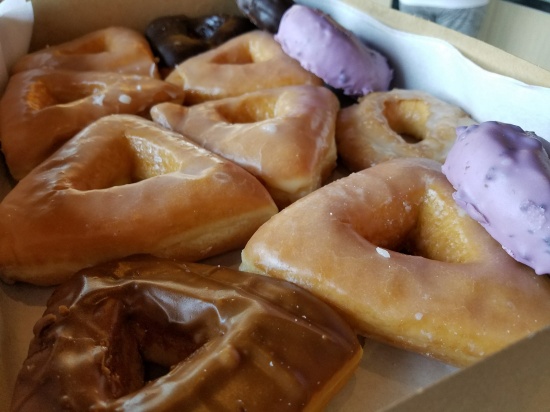 And finally, here are my rankings for Madbrook Donut Company:

Those original glazed donuts are really the shining example of something so simple, but so good. With such a variety of donuts to choose from, you’ll be hard pressed to not find something that sounds delicious.

The storefront is a pretty open space, with high ceilings and a big floor footprint behind the counter. The display cases are consistently stocked with donuts, with the back-up racks kept nearby for quick tray swap-outs. There’s also an adjacent storefront space that looks like it was re-purposed to become a small dining area.

The shop staff were very welcoming and patient with us as we were looking around the display case making our decisions. With some donuts flying off the shelf, the racks got replaced quickly, helping expedite the line.

If I remember correctly, you could get each donut for about $1.50 or less. Given the consistent quality of all the donuts that we had, I don’t think that’s a price you can argue with.