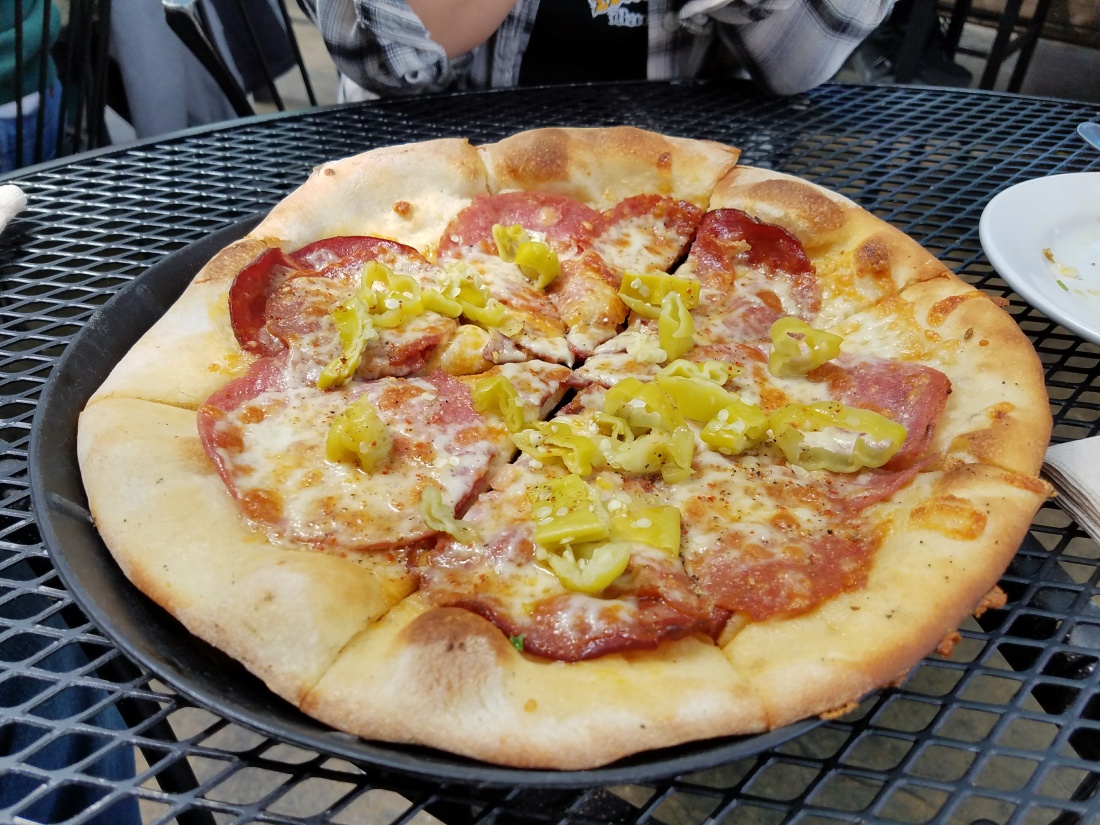 After we finished gorging on the dozen donuts that we had bought from Madbrook Donut Company, Tina and I decided to head out and attempt to walk off those donuts on the Ogden River Parkway. The trail itself spanned over 17 miles, but we only tackled a small stretch that we picked up near their apartment. It also gave me the opportunity to break out the DSLR camera I had brought with me to capture some of the beautiful outdoor scenery in that area.

By the time that we finished our walk, it was pretty much getting close to lunchtime. We decided to stick to a nearby spot that both Tina and Mike had been to before: Slackwater Pizzeria & Pub. Pizza and beer, no matter where I’ve gone, always seems to be a winning combination.

Slackwater is situated in a pretty good location right by the main highway running through the town of Ogden, where it also borders the Ogden River Parkway trail that Tina and I had been on earlier. The restaurant has both an indoor and outdoor seating area; since the weather was really nice, we opted to sit outdoors, where you could also partially hear/see the river. I’m not sure if there was some initial confusion on who would be covering our table, since it seemed like a little while before anyone stopped by. But once our waitress came over and welcomed us, the service was smooth after that.

Naturally, one of this place’s specialties was their variety of pizzas, complete with creative names and intriguing ingredient combinations. We were hungry enough though that we decided to start off with their smoked pork nachos and follow that up with some pizzas. In an effort to manage my gout, I went with a vegetarian option and ordered the Piper Pesto, which consisted of a pesto cream sauce, roasted garlic, a mix of cheese, tomatoes, and pine nuts. They went with the Italian Job, loaded up with pepperoni, salami, capicola ham, and some pepperoncinis.

One of the unfortunate things that rather slipped my mind was to get a flight of beers to sample while at Slackwater. I usually like to try the variety, rather than commit myself to a whole pint if I hadn’t tried something yet. It wasn’t before long that our nachos arrived to get things started. A plate of tortilla chips topped with some house-smoked shredded pork, smoked poblano and Anaheim chilis, diced tomatillos, cilantro, a three-cheese blend, chimichurri, and pico de gallo, these nachos certainly pack on the flavor as well as the heat. You definitely get the smoky flavors coming on from a combination of the ingredients, and I think the tortilla chips were actually finished with a light sprinkle of paprika as well that complimented everything. It was certainly a good way to get the tastebuds going.

The kitchen was on top of cranking out the pizzas, because we didn’t actually get to finish all the nachos before they arrived at the table. The pizzas themselves were actually a relatively good size (even for a personal portion), about the same diameter as a large dinner plate. The aromas started to creep up from the pizzas; I didn’t need any more convincing to dive in for the first bite. The crust came out just the way I like it: a slight crisp on the outside with a chewy inside. I think they had the roasted garlic oil brushed on the pizza before they dropped the pesto cream sauce on there, because the way those flavors layered up was really nice. Even though the pine nuts provided a texture contrast to the rest of the pizza, I was a little ambivalent on having them added on there as a topping from a taste perspective. I did like that the feta cheese provided that flavor contrast from the rest of the ingredients as well.

With a nice, casual atmosphere and a wide selection of things to eat & drink, Slackwater Pizzeria & Pub is a great place to hit up whether you’re looking for a quick weeknight meal or relaxing on the weekend. I’m a person that definitely appreciates some crazy combinations when it comes to food, and quite a few of the other pizza options that were on Slackwater’s menu really sounded fascinating (I’m looking at you, Taste of Thai or Tikka Masala). The next time I come out to visit, a pizza sampler (coupled with a high amount of resulting leftover pizza) should definitely be on the agenda. 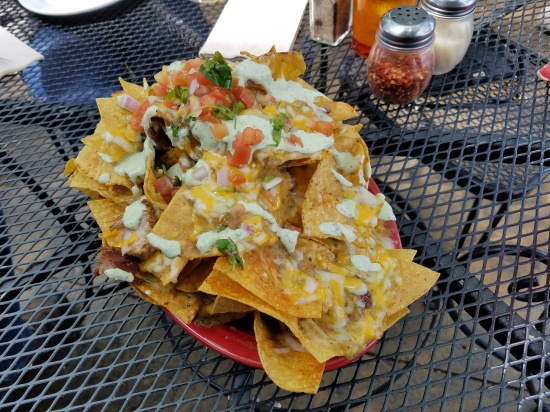 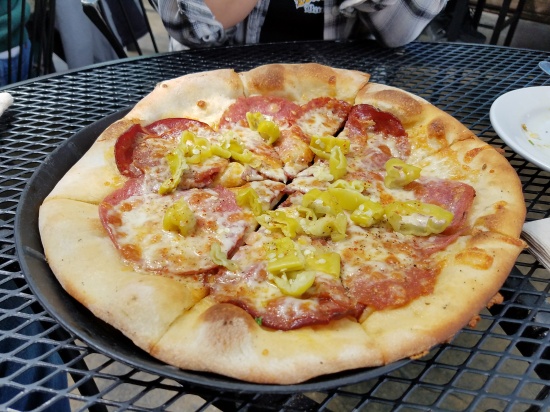 And finally, here are my rankings for Slackwater Pizzeria & Pub:

The plentiful selection of pizzas is sure to keep you occupied with eating through their menu for a while. On top of the wide range of options, the food tastes great as well.

The feel of the place is slightly different between the indoor and outdoor seating, but not by much. I found the outdoor seating to be pretty refreshing to enjoy the beautiful weather. They also set up live music and events inside the dining area as well.

Even though the initial waitstaff confusion led to us sitting around and waiting to put our drink orders in, after our waitress realized the issue, she made a point to periodically stop by and see how we were doing. The food also cranked out of the kitchen at a rapid pace as well.

The appetizer pricing might have been a little on the steep side, but I think that the pizza pricing wasn’t too bad, considering the larger quantity of ingredients that they were using to assemble their pizzas.